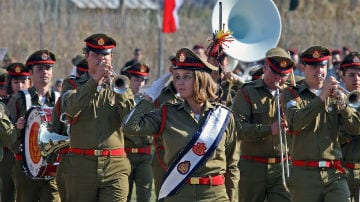 The Israel Defense Forces (IDF) inaugurated a new infantry brigade, dedicated entirely to special operations, on Sunday, December 27, at an official ceremony at the Harod spring.

The new brigade, dubbed the Commando Brigade, will be comprised solely of infantry special-operations units removed from their previous chain of command structures to create this new tactical formation.

“The dangerous winds blowing from Lebanon, threats by the Islamic State, the escalation in Judea and Samaria as well as threats from the southern border, demand the capability of the personnel in this new brigade now more than ever,” said IDF Chief of Staff Lieutenant General Gadi Eizenkot during the ceremony.

Colonel David Zini was given command of the brigade, which will operate as part of the 98th Infantry Division.

According to the IDF Spokesperson, the Commando Brigade is the brainchild of Lt. Gen. Eizenkot and is the implementation of operational lessons learned after Operation Protective Edge in the summer of 2014 and the Second Lebanon War in 2006.

The objective of the units making up the brigade will be to perform operations and engage in combat beyond enemy lines.

“The Commando Brigade is not only an integration of the elite teams of the Infantry Corps under one command,” said Commander of the 98th Infantry Division Brigadier General Uri Gordin.

“It is also expected to lead operational and tactical thinking, to develop the knowledge and the art of war for special operations, to win wars, and to strike our enemies between wars,” concluded Brig. Gen. Gordin.

The chosen insignia for the new brigade depicts the Hebrew letter Kuf (C), the first letter in the Hebrew spelling of commando, designed as a commando knife rising from the sea with a two-headed arrow above it. It symbolizes the special capabilities of the brigade and its mobility by air, land, or sea.