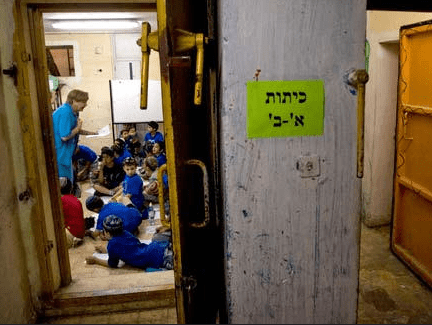 Israel’s southern city of Sderot, located less than a mile from the Gaza border, is an experience in contrasts. Though the city’s motto since electing Mayor Alon Davidi in 2013 has been “Something good is happening in Sderot”, the city is still best-known as the “Bomb Shelter Capital of the World” after having to reinforce every home, playground and bus stop against the constant barrage of Qassam rockets fired at the town since 2001 from the Gaza Strip.

With a population of approximately 25,000 people, 95 percent are presumed to suffer from Post Traumatic Stress Disorder (PTSD), caused by the incessant attacks. However, with relative calm settling over Sderot since the end of Israel’s 2014 conflict with Gaza, the city is taking positive action to create a future for its citizens.

Meir Panim is one of the city’s partners in the quest to bring normalcy and stability to the area. Though the charity organization is best known for its soup kitchens throughout Israel, in Sderot “the needs are even greater than providing food,” Goldie Sternbuch, Director of Overseas Relations for Meir Panim, told Breaking Israel News.

She added that children need the most help, saying that “especially for children from struggling homes and difficult living situations, they need caring mentors and positive experiences and activities to round out their lives in order to build a future.”

In contrast to the city’s past “victim” attitude, today Sderot focuses on helping citizens learn to repair and heal the community and themselves. Long-term projects and programs implemented by Mayor Davidi and the municipality are underway, including projects focused on Sderot’s youth.

“For the nearly 2,000 teenagers between the ages of 13-18 years old living in Sderot running from rocket fire their entire lives, part of their identity is trauma and poverty,” noted Daniel Berkeley, manager of the Sderot Youth Department, to Breaking Israel News. “Everyone needs healing therapies, healthy distractions, nutritious food and a safe shelter.”

In response to this need, the municipality is providing Meir Panim with two buildings to be used as youth clubs. “A large part of the Meir Panim budget goes towards funding youth programs to provide hope for a better future,” Sternbuch told Breaking Israel News. “Meir Panim presently funds five youth clubs in Israel and we are adding these two to our list.”

With the majority of Sderot youth coming from disadvantaged homes, compounded by PTSD, the need for a nurturing environment is clear. Meir Panim is investing approximately $296,000 into making the Sderot youth clubs welcoming and safe.

The first round of work is due to begin on the already active above-ground center, called TikvaHope. This building houses two bomb shelters on its premises, a kitchen and a computer lab.

“Youth centers attract children and parents who cannot afford extra-curricular activities,” explained Berkeley. “Without these centers, kids would be wandering the streets doing nothing or worse.”

Nearly half of the funding for the youth centers is raised locally. The centers receive donations of food, volunteer staff, transportation and funds from the municipality covering the cost of therapies.The rest comes from donations made to Meir Panim.

During Operation Protective Edge, teens and young adults from the Meir Panim youth organizations volunteered in shelters and with young people to run programs and organize needs.

“These teens ended up going to neighboring Beer Sheva to advise, train, and strengthen peers based on their own experiences. That is the self-confidence we strive to achieve through the TikvaHope youth clubs,” said Berkeley to Breaking Israel News.

The Sderot youth centers are located just around the corner from the city’s high schools. The are open three days a week, operating during after-school hours until 10:30 pm. Everyone is welcomed with no question asked. Once a week, the facilities are used for elder programming.

Sandwiches, snacks, fruits and vegetables are provided. Educational programs on drugs, alcohol and safe sex are run by professionals. There are computer labs for homework.

The volunteer staff hail from the IDF and the local Sapir College. The college students create and run educational programs relating to health, fitness, cinema, sports, and holiday activities. There is also ongoing tutoring help by both the college students and teen peers.

An ecological vegetable garden is already growing. Teens at TikvaHope, with the help of their mentors, have built a working fish pond and animal habitats for the purpose of establishing an animal-therapy program.

Andi Franklin, the wife of William Franklin, Executive Director of the Jewish Federation of Reading, Pennsylvania, which supports Meir Panim, told Breaking Israel News, “It is a privilege to help and be connected to Meir Panim and the great services that they provide throughout Israel.”

She added, “I am really impressed to see the community working as a team with teens, college students and other professionals to nurture children and give them a great future.”