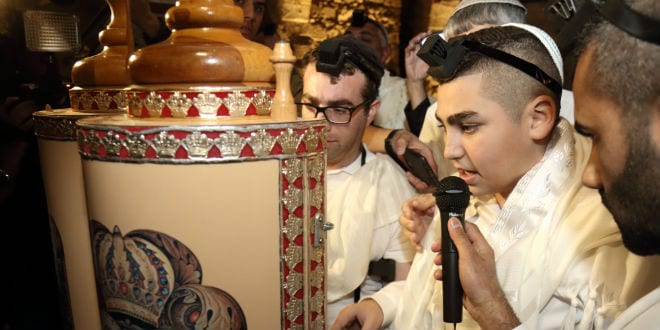 All too often young children in Israel are at the receiving end of terrorism, whether it be in the form of becoming a terror victim or as a bereaved child and sibling. Israeli President Reuven Rivlin recently hosted 58 such children who were either terror victims or bereaved family members, for a collective Bar/Bat Mitzvah celebration at his residence in Jerusalem.

“From an early age you handled loss, pain, responsibility, changes and physical and mental difficulties,” President Rivlin told the children. “All of you have chosen to grow out of the difficulty and out of pain.”

One of those children who attended the Bar/Bat Mitzvah celebration was Naor Ben-Ezra. Naor, who just had his own personal Bar Mitzvah celebration last week, was stabbed in the neck by a Palestinian his age in the northern Jerusalem neighborhood of Pisgat Ze’ev.

“The price of terror is cruel, and the injury I sustained was mortal and could have had serious consequences ranging from a brain injury, which the doctors were concerned about, to death,” recounted Naor. “Thankfully, and because of my strong will power and the fact that I didn’t give up, the support of my family and devoted care of my doctors, it was a great miracle by which I was saved.”

Naor said that he will continue moving forward and making progress. “My rehabilitation from that near-fatal injury continues even now and I plan to return to school, to play with friends, and go back to my normal routine as it was before the injury,” Naor said. “As the doctors said, the way forward is long but I’m willing to deal with everything and not give up.”

President Rivlin asked that all the other children there follow in Naor’s path. “Please continue to believe, dare to dream and achieve,” said Rivlin. “Receive with love the new responsibilities laid on your young shoulders and make proper and welcome use of it.”

The bar and bat mitzvah celebration concluded a day of a series of events for the children, which were coordinated by Israel’s Terror Victims Association.