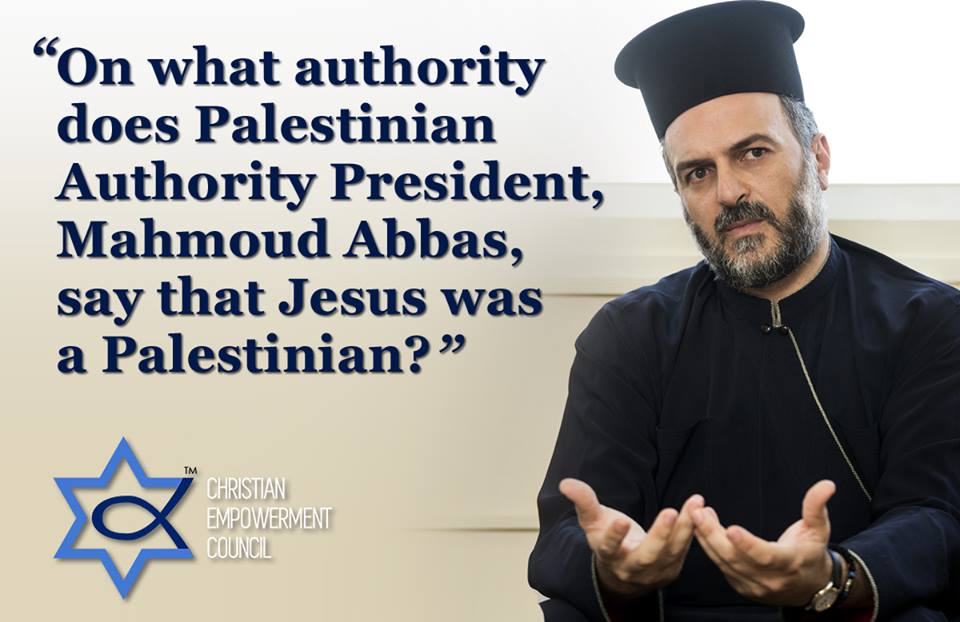 In response to repeated statements by Palestinian Authority (PA) officials that Jesus was a Palestinian, Israeli Christian leader Father Gabriel Naddaf denounced the claims on Facebook earlier this month.

“On what authority does President Abbas claim that Jesus was a Palestinian?” Naddaf wrote. “The Bible says that He was born in the Jewish city of Bethlehem to Jewish parents from the city of Nazareth and was circumcised on the 8th day as a Jew and presented to the Jewish Temple by His parents according to the Mosaic law.”

The PA has had a long-standing policy of rewriting history to undermine Jewish connections to the Land of Israel and to strengthen Palestinian and Arab claims to the land.

Palestinian Media Watch (PMW) has documented this effort since 1998, when Al-Ayyam daily paper printed, “Dr. Yussuf Alzamili [Chairman History Department, Khan Yunis Educational College] called on all universities and colleges to write the history of Palestine and to guard it, and not to enable the [foreign] implants and enemies to distort it or to legitimize the existence of Jews on this land… [History lecturer Abu Amar] clarified that there is no connection between the ancient generation of Jews and the new generation.”

According to PMW, PA Chairman Mahmoud Abbas said last Christmas season, “We celebrate the birth of Jesus, a Palestinian messenger of love, justice and peace.” ‎This was not the first or last time Abbas or other PA officials have made or repeated such a claim. Some have gone so far as to call Jesus “the first martyr” for the Palestinian cause.

In a television special earlier this year about former Greek-Catholic Archbishop of Jerusalem Hilarion Capucci, who exploited his position to smuggle arms, PA Secretary-General of the Jerusalem Council Hanna Issa claimed the archbishop told him, “First of all, don’t forget that the first Martyr (Shahid) was Palestinian – Jesus the Messiah. Look how they tortured, crucified and killed him…”

Naddaf serves as Head of the Greek Orthodox Church in Yafia, near Nazareth, and of the Christian Empowerment Council, a group committed to further integration of Christians into Israeli society. He blasted the erroneous position. “His family were Torah-observant Jews,” Naddaf explained, “and as an adult, Jesus Himself affirmed the authority of the Torah and the Prophets. He attended Synagogue on Sabbath and even taught in the Jewish Temple in Jerusalem and observed the Jewish feasts of Hanukah and Passover.”

Naddaf also called out the PA for its abuse of history for political gains. “According to the Bible, the Land of Israel, including Judea and Samaria, belongs to the Jewish people forever. So, no matter how much the Palestinian Authority tries to distort history, they cannot manipulate the Word of God to legitimise their political aims. The Promises of God to His people cannot be erased.”