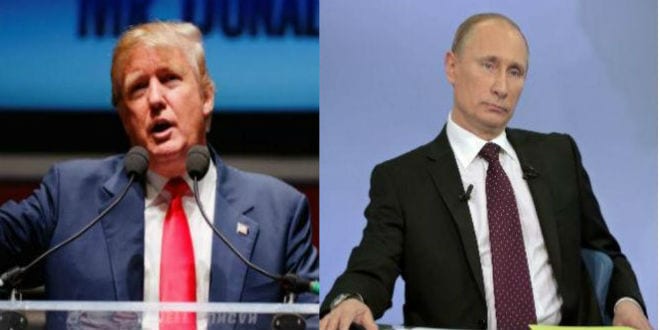 During an interview on ABC Today, when Trump was asked about Putin’s reported involvement with the murder of journalists critical of his government, Trump replied, “Our country does plenty of killing also.”

He also used the opportunity to take a jab at US President Barack Obama, saying, “At least he’s a leader unlike what we have in this country.”

Trump then challenged reporters to come up with hard evidence that the Kremlin, under Putin’s rule, has ever been involved with an assassination attempt on a journalist. “In all fairness to Putin, you’re saying he killed people. I haven’t seen that. I don’t know that he has,” said the billionaire businessman.

Trump has expressed admiration of Putin in the past. In July, he said that if he were elected president, “I think I would just get along very well with Vladimir Putin. I just think so.” Putin in turn praised Trump this week, saying at a press conference on Thursday that the controversial businessman is a “very colorful, talented person”.

Trump was clearly gratified by Putin’s comments, saying in a Friday interview on NBC, “When people call you ‘brilliant’ it’s always good, especially when the person heads up Russia.”

The mutual respect between the two larger-than-life figures prompted a satirical campaign ad from Ohio Governor John Kasich, who is also in the running for the Republican nomination in the upcoming presidential elections.

The fake announcement, put out in a video ad on Saturday, proclaimed that Trump had selected Putin as his running mate in the 2016 campaign, stating, “In a bold and visionary move characteristic of everything he does, today terrific billionaire Donald Trump named Russian president Vladimir Putin as his running mate in the 2016 US presidential campaign. Trump pledged that together with Putin he would ‘Make Tyranny Great Again’.”

The announcement went on to sarcastically add, “Trump said he picked Putin to be his vice-president for his strong approach to dealing with dissent, flexible approach to democracy, rule of law and the Constitution, and his willingness to regularly violate other countries’ territorial integrity in blatant violation of international law if it suited his aims.”