Can Syrian Refugees Be Compared to Jews Fleeing Death Camps? Obama Thinks So 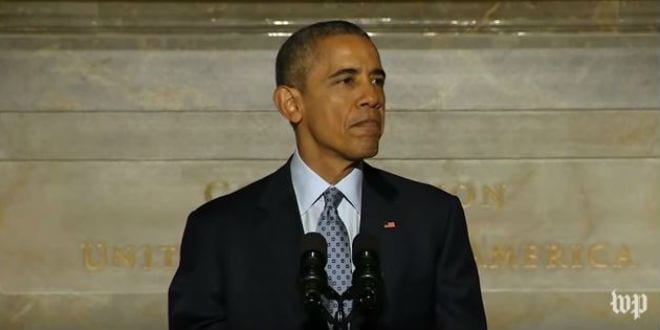 Obama, who is battling opposition against his plan to settle thousands of refugees from war-torn Syria in the US, drew comparisons between modern and historical immigrant communities, urging the audience to see in the Mexican immigrant “the Catholic immigrant of a century ago”, and in the Syrian refugee “the Jewish refugee of World War II.”

He invoked America’s history of accepting immigrants and outsiders, saying, “In these new Americans, we should see our own American story.”

In a thinly veiled criticism of political opponents who have been outspoken against accepting Syrian refugees, Obama reminded the crowd of the US’s internment of Japanese citizens during the Second World War, and said that the country had then “succumbed to fear.”

He warned today’s Americans against making the same mistake today. “One generation passes, two generations pass, and suddenly we don’t remember where we came from,” he said. “We need to resolve never to repeat mistakes like that again.”

Obama is not the first to draw the comparison between Syrian and Jewish refugees. Many in recent weeks have made the argument that rejecting Syrian refugees is paramount to the US turning away Jewish refugees during World War II, though many others have furiously rejected the analogy.

Critics of the comparison have pointed out that unlike the Jews rejected by America during World War II, Syrian refugees are not fleeing imminent death, and that refugee camps in Jordan, Lebanon and Turkey, while not boasting high-quality conditions, are simply not analogous to death camps like Auschwitz.

Others have noted that when Jews applied to the US for refuge in 1939, there was no established Jewish state which could have taken them in, whereas today, there are a considerable number of wealthy Arab states which have the potential, if not the desire, to take in Syrian refugees. Of course, no Arab state has shown any interest in doing so, and some have categorically refused.

Perhaps most persuasively, many have argued that refugee Jews did not represent any kind of terrorist threat to the US, whereas there is evidence that at least some of the Syrian refugees now seeking to settle in the US and Europe have been radicalized by violent Islamic groups like ISIS.