Hebron Community: Cave of the Patriarchs Flooded Due to Government Inaction

Home » Hebron Community: Cave of the Patriarchs Flooded Due to Government Inaction 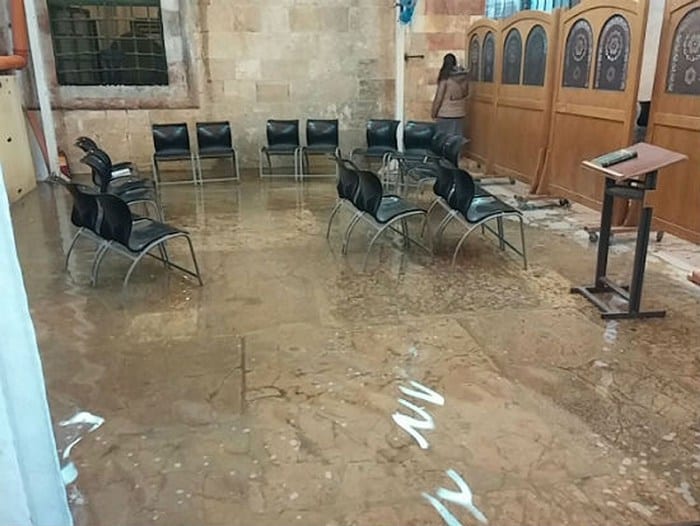 The rains of plenty that fell over the weekend in Hebron caused—as they do every year—a significant flooding in the Cave of the Patriarchs, in the courtyard where Jewish worshipers usually congregate.

There’s a simple solution to this recurring problem, say members of the Jewish community of Hebron: build a roof over the problem area. They also claim they already have the required supplies, all they need is government approval for the work, which isn’t forthcoming.

“As we know, the cave is divided between Arabs and Jews,” Noam Arnon, spokesman for the Hebron Jewish community told Kippa. “The Jews have several smaller rooms and a courtyard, which has become the main hall where Jews pray because the smaller rooms are too small. The Arab area is not exposed to the rainfall and therefore they are opposed to doing any work on the place.”

Arnon explained that the courtyard does not have a roof and it is covered only with a tarpaulin, and so even a mild rain rapidly floods the courtyard, making it unavailable to Jewish worshipers.

“We asked the government and we already had a donor willing to contribute several million shekels to the project. We prepared the covering according to all the most stringent standards in terms of conservation, safety, aesthetics and acoustics, and invested a fortune in glass panels that were specially prepared by glass engineers, and have been waiting for a decade in a government warehouse, for approval to install them,” Arnon said.

He explained that this is a transparent roofing made from special glass to keep the character of an illuminated, enclosed courtyard.

“It appears that the Arabs do not want any expression of a Jewish foothold in the place. Under the Muslim occupation it was barred to Jews for 700 years, so it’s not surprising that they don’t want Jews to be comfortable here. But what’s surprising is that the government gives in to their pressure and does not allow Jews to make even a rudimentary renovation.”

According to Arnon, it is possible to install the glass roof, which has been waiting in storage for a decade, within 24 hours. “This would constitute no change in the character of the place, it will continue to be a courtyard, but instead of partial tarpaulin coverage, it will be covered with tempered glass under which Jews can pray comfortably.”