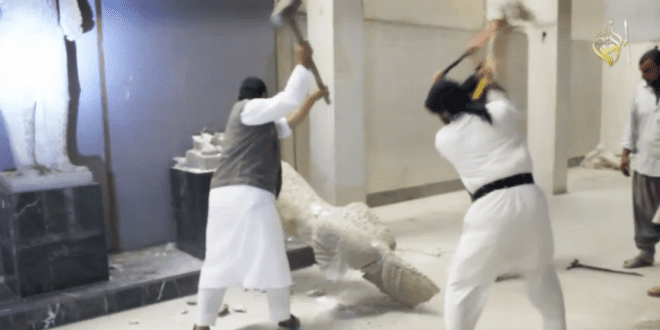 American black market dealers in antiquities are inadvertently supporting the Islamic State (ISIS), experts claim. The market not only funds their terrorist activities, it also enables them to continue, Reuters reported.

“They’re benefitting not only from the sale but also from the trade itself,” said Deborah Lehr, chair and co-founder of Washington-based Antiquities Coalition, a group of experts from around the world working together to fight the illegal trade of antiquities by terror groups such as ISIS.

“There are some collectors on the market who have actually said outright that a way to protect this material is to buy it. Of course, that’s a fallacy, it just means the price provides more incentive for ISIS to loot more and sell more and make more money,” says Richard Kurin of the Smithsonian Institution.

For years, ISIS has been conducting a cultural war in the countries in which it operates, destroying artifacts it considers “blasphemous” under Islamic law. What the group doesn’t destroy, it sells on the black market to raise funds for its operations.

“You see one day pristine sands, and three months later, it looks like Swiss cheese,” Lehr says, referring to the looted territories.

The jihadist group often enlists local residents to do its dirty work, she adds. “Local people are doing a lot of this for very understandable reasons, it’s a very difficult economic time.”

Once removed from Syria and Iraq, some artifacts remain in the Middle East, while others are shipped to Europe, Asia or America. Despite their best efforts, customs officials often do not recognize the stolen materials.

“Your average customs official will know if he sees a kilo of cocaine, that it’s automatically illegal. But if they’re seeing an ancient pot, they don’t know in some cases whether it’s a tourist trinket or it’s a 3,000-year-old urn,” said Lehr.

“Nobody is coming to you with a black mask and saying ‘Hey, we stole this,'” Kurin points out.

To fight this phenomenon, museums, such as the Smithsonian Institution, are working to train customs staff to identify stolen artifacts. They also use their expertise to identify suspicious items. The Smithsonian, for its part, houses antiquities from a region in Syria currently being desecrated by ISIS.

The red list, maintained by the International Council of Museums, also plays a role in combating the theft and black market sale of artifacts. This database warns which artifacts are at risk of being stolen.

While US-based online marketplace eBay has not uncovered any evidence of such stolen artifacts being sold through its service, it has warned its users to beware.

The looting of artifacts is also raising fears of long-term implications. “These kinds of cultural cleansing that we’ve seen going on by ISIS is really a precursor in many instances to ethnic cleansing,” says Lehr.