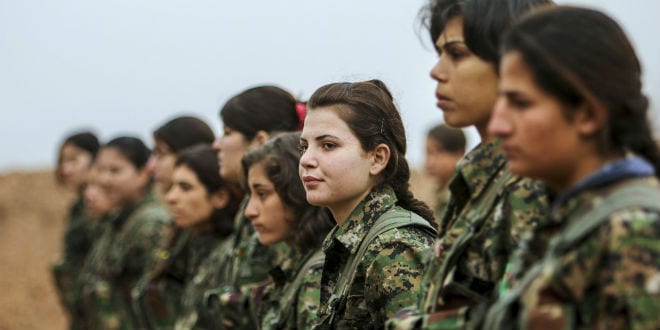 Fifty Syriac Christian women in Syria’s Hasakeh region have left their homes, families, and jobs behind in order to join an all-female battalion formed to fight the growing menace of the Islamic State.

The battalion, known as the “Female Protection Forces of the Land Between the Two Rivers” – those two rivers being the Tigris and Euphrates – graduated its first recruits in August. So far, about fifty women have graduated from its training camp in the town of Al-Qahtaniyeh.

Syriac Christians, who pray in the ancient Aramaic language, follow the eastern Christian tradition. Both Orthodox and Catholic branches exist within the community, which makes up about 15 percent of Syria’s Christian population.

The Christian community in Syria constituted about five percent of the country’s total population before the conflict with ISIS began. Since then, the militant Islamic state has systematically driven thousands of Syrian Christians from their homeland and killed and enslaved thousands more.

The women in the new all-female battalion are eager to join the resistance against ISIS. Some credit their religious values with the desire to enter the fight. According to the Times of Israel, one fighter, Babylonia, 36, told AFP, “I’m a practicing Christian and thinking about my children makes me stronger and more determined in my fight against Daesh (ISIS).”

She said that her husband, also a fighter, encouraged her to join the battalion, leaving behind their two children. “I miss Limar and Gabriella and worry that they must be hungry, thirsty and cold. But I try to tell them I’m fighting to protect their future,” she told AFP.

Indeed, the future is dark for women and children under the control of ISIS, which has notoriously built a network of sex slavery, trading and selling kidnapped and enslaved women throughout their territory.

The battalion has already seen action, fighting alongside the Syrian Democratic Forces (SDF), which is made up of a coalition of Kurdish, Arab and Christian fighters, to capture the strategically located town of Al-Hol. The victory was significant for the SDF, as the town lies on a key route between ISIS-controlled territory in Syria and Iraq.

The Syriac Female Protection Forces are not the first all-female fighting unit to face ISIS. Last summer, a unit made up of Yazidi women, who are among the most persecuted under ISIS, formed to take on the sprawling jihadist state, which has kidnapped and killed thousands of Yazidis.