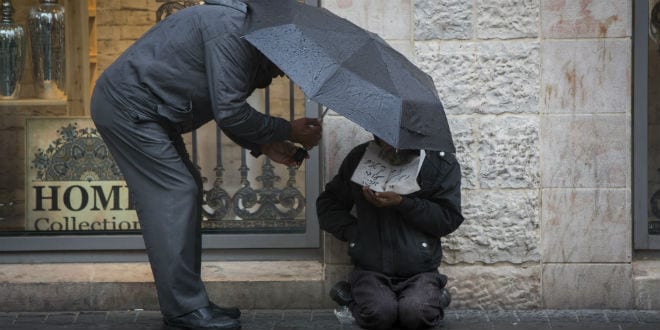 The Israeli National Insurance Institute released this week its 2014 annual poverty report revealing that more than 1.7 million Israeli citizens, including one out of every three children, live below the poverty line.

“Every year, during ‘Poverty Week’, which is a time worldwide to promote poverty awareness and activism, the government puts out their yearly statistics,” explained Goldie Sternbuch, Director of Overseas Relations for Meir Panim, Israel’s premier organization which provides both immediate and long-term relief to impoverished young and old, to Breaking Israel News. “This year’s statistics are shocking.”

According to the report, 444,900 Israeli households live below the poverty line, or a total of 1,709,300 people. This number represents 22 percent of Israel’s population of 8 million. The poverty rate among Israel’s elderly population rose to 23 percent. The country’s poor includes 776,500 children or 31 percent of minors in Israel.

“This one time of year, governments get on board about poverty. Politicians have a ‘festival on the radio’ discussing their plans and developing programs to combat the problem in Israel,” noted Sternbuch. “I believe that most have good intentions. But, hungry and needy people cannot wait for plans and programs to pass in budgets and then get implemented. They need help today. That is what Meir Panim provides on a daily basis.”

For the past 15 years, Meir Panim has actively and consistently fed the hungry and helped the disadvantaged in Israel, giving a lifeline to those who need it most.

Annually, Meir Panim serves 409,500 hot, nourishing meals through their network of free restaurants, 176,400 Meals-On-Wheels are delivered to the homebound, disabled and elderly, 81,600 hot lunches are provided to needy children through Meir Panim’s youth clubs and food shopping cards and food packages are distributed before holidays to struggling families and Holocaust survivors.

The latest poverty report represents a marked increase in the number of families, individuals and children living in poverty as compared to 2013. Israel is currently ranked second from the bottom in relative income poverty (citizens lacking the minimum amount of income needed in order to maintain the average standard of living in the society in which they live) by the Organization for Economic Cooperation and Development (OECD), above only Mexico.

“Since the 2013 poverty report, the statistics have reflected that more and more working people are poverty stricken. This is a tragedy,” explained Sternbuch to Breaking Israel News. “It used to be easy to think that the poor were the marginalized of Israel’s population. Today we see that mainstream, hard working people cannot make ends meet.”

The data also indicated that the impoverished in 2014 became even poorer, as the index of the depth of poverty increased by some 6 percent while the poverty severity index increased by 10 percent.

“For the past 10 years that I have worked for Meir Panim, we have noticed a deterioration in the basic standard of living of Israeli citizens,” shared Sternbuch with Breaking Israel News.  “More and more working couples are turning to Meir Panim branch managers at our six locations across Israel asking for food. Even with two working parents doing all that they can to maintain a simple lifestyle, people are struggling to keep food in their kitchens. Of course, the situation for the elderly or out-of-work is even more dire.”

Israel’s minimum wage for a full time worker is approximately $1,220 per month. The government has approved for 2017 an increase to $1,390 per month. These figures show that a standard sized family living a humble lifestyle would most likely still struggle to make ends meet.

Meir Panim combats poverty every day of the year, not only through their food programs but also with their after school and camp activities. “We not only assure that children get the educational, nutrition, and healthy mentors that they need, we also give them hope that they can look forward to a better future,” notes Sternbuch.

Israel is often on the cutting edge of technical, medical and agricultural advances which are respected worldwide. “Yet,” Sternbach noted, “when thinking to Israel’s future, we need to consider that 1 in 3 Israeli children live in poverty and do not get proper nourishment. This strongly compromises how well they do in school. Hungry children cannot meet their potential. 10 or 15 years from now, can we expect that Israel will still be an innovative country?”