Prominent Rabbis Sternbuch, Amar Hint that the Messiah is “Just Around the Corner”

Home » Prominent Rabbis Sternbuch, Amar Hint that the Messiah is “Just Around the Corner” 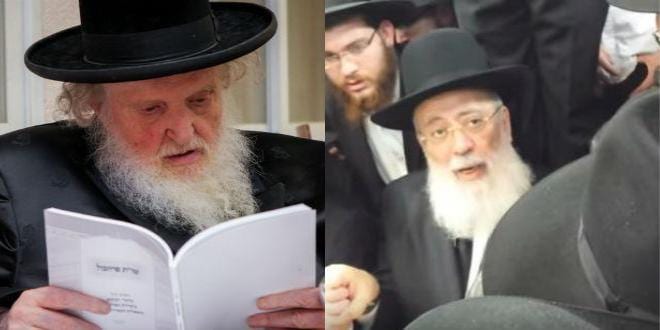 Two prominent rabbis in Israel – Rabbi Moshe Sternbuch and Rabbi Shlomo Moshe Amar – have hinted in public that the Messiah is “just around the corner” based upon certain world events taking place today.

Rabbi Sternbuch, vice president of the Rabbinical Court and head of the Eidah Charedit organization in Jerusalem, recently said that people should “put on their Shabbat clothes in preparation for the Messiah.”

As reported by the Hebrew language website Kikar Shabbat, Rabbi Sternbuch was giving over his regular weekly lesson when he began to relate the arrival of the Messiah to the recent conflict between Turkey and Russia. He concluded that in the context of this conflict, we should anticipate the Messiah.

“We have received a direct teaching, passed down from one to another, from the Gaon of Vilna, that when Russia goes and conquers Istanbul, the capital of Turkey, it is time to quickly put on your Shabbat clothes and expect the Messiah,” he said.

“Here we have Russia and Turkey in a conflict with each other. We hear sounds of war. All of the nations seem so surprised that Turkey began a fight with Russia,” Rabbi Sternbuch explained.

“But we see in this the realization of the teachings of the sages, that when the Messiah needs to come, God will incite nations against each other, until, against their will, there will be a war. Therefore, as the Shmittah goes out, we should have great inspiration to wake up and repent.”

Touching upon a teaching taught by the Jewish sages, Rabbi Sternbuch reflected on the persecution the Jews will face from the Arab nations as part of the messianic process.

“It is also written that before the Messiah comes, Israel will suffer greatly from the sons of Ishmael (Arabs) and they will succeed in antagonizing us. We are at a crossroads and we need to pray to God to redeem us. We have to wake up and repent or, if not, God forbid, the Ishmaelites will overcome us.”

“This is precisely the time to repent and pray,” he said. “Messiah is just around the corner and is waiting to arrive. It is impossible to understand how a country like Turkey can start a war and refuse to apologize. They are crazy! God is confusing them, therefore we need to strengthen ourselves in repentance so we will merit a true redemption very soon.”

In a related report on Kikar Shabbat, Rabbi Amar, the Chief Sephardic Rabbi of Jerusalem and former Sephardic Chief Rabbi of Israel, was quoted as saying that the world is currently in the closest possible moment for the arrival of the Messiah.

Speaking at an assembly of followers of the Hassidic Chabad movement in Kfar Chabad, Rabbi Amar said, “We are at the closest possible period to the Messiah. We have never been this close to the revelation of the Messiah before. All the signs given by the prophets, the early and later sages, and what is written in the Zohar (the basis of Kabbala), are in place for us.  All of the great men of the last generations, and at their head is my rabbi [Rabbi Ovadia Yosef], they said ‘Behold, he is standing just around the corner’. We just have to stay strong.”

Rabbi Amar quoted a teaching from the last Chabad leader, Rabbi Menachem Mendel Schneerson, in which he warned that the time before the messiah will intensify conflict around the world. “There will come a time when we won’t be able to sleep because of all the troubles that will befall us,” Rabbi Amar related.