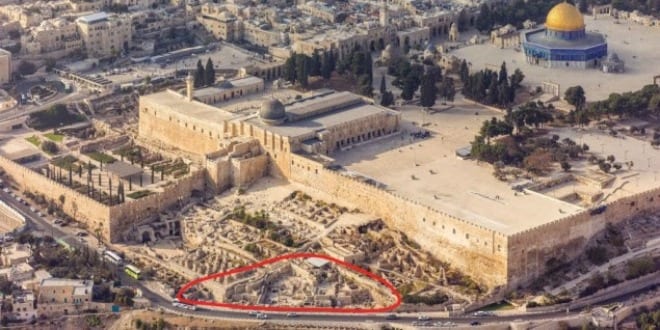 The first ever seal impression of a Judean king was unearthed in Jerusalem on Wednesday, December 2, during a scientific excavation. The significant discovery was made at the Ophel excavations, at the foot of the southern wall of the Temple Mount.

Researchers from the Hebrew University of Jerusalem’s Institute of Archaeology found the impression, which is of the royal seal of King Hezekiah (727-698 BCE).

“This is a rare finding, and it’s a real privilege to have discovered it,” said Dr. Eilat Mazar, who directs the Ophel excavations, to Tazpit Press Service (TPS). “To find an object that was made and touched by Judean kings in the time of the bible is an exceptional and one-of-a-kind experience.”

The impression bears an inscription in ancient Hebrew: “Belonging to Hezekiah [son of] Ahaz king of Judah”. It also features a two-winged sun, with wings turned downward, flanked by two ankh symbols symbolizing life. Measuring 9.7 X 8.6 mm, the oval impression was imprinted on a ‘bulla’ – a piece of inscribed clay.

The bulla was originally used to seal a document written on papyrus. It was found together with 33 additional bullae imprinted from other seals, some bearing Hebrew names.

Dr. Mazar added: “Although seal impressions bearing King Hezekiah’s name have already been known from the antiquities market since the middle of the 1990s, this is the first time that a seal impression of an Israelite or Judean king has ever come to light in a scientific archaeological excavation.”

King Hezekiah is described favorably in the Bible. He is depicted as a resourceful and daring king, who centralized power in his hands. The Judean king successfully maintained the independent standing of the Judean Kingdom and its capital Jerusalem, which he enhanced economically, religiously, and diplomatically.

The symbols on the seal impression from the Ophel suggest that they were made late in Hezekiah’s life, after he had recovered from the life-threatening illness of shehin (boils), when the life-symbol became especially significant for him (ca. 704 BCE).

The excavation site is situated within the Ophel Archaeological Park, which is part of the National Park Around the Walls of Jerusalem under the auspices of the Israel Nature and Parks Authority.

The seal impression was found during the wet-sifting of earth layers from the excavation in the Emek-Zurim wet-sifting facility, under the auspices of the Nature and Parks Authority and the City of David Foundation.

The discovery of King Hezekiah’s Royal Seal impression in the Ophel excavations vividly brings to life the biblical narratives about King Hezekiah and his lifetime activities in Jerusalem’s Royal Quarter.