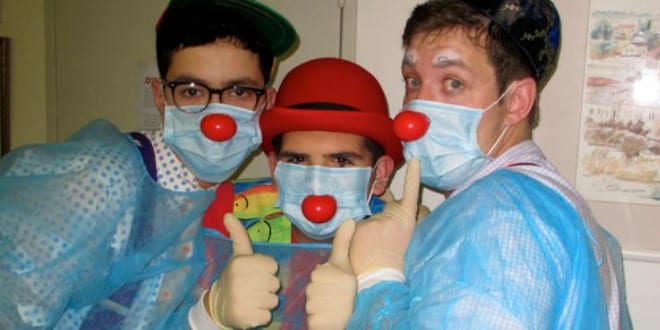 “You treat a disease, you win, you lose. You treat a person, I guarantee you, you’ll win, no matter what the outcome,” says the late actor Robin Williams in the 1998 film “Patch Adams,” which shed light on the life of influential physician, social activist, comedian, and clown Hunter Doherty Adams.

Today, although doctors cannot promise miracles, there is mounting evidence that a regimen of laughter—applied pragmatically in diverse settings—can heal. And as it turns out, Patch Adams has a Jewish counterpart in the New York City area.

Israeli researchers, led by Dr. Shevach Friedlerat at the Assaf Harofeh Medical Center’s In-Vitro Fertilization (IVF) Unit, in 2011 published results from a study examining the impact of medical clowning on patients struggling to bear children. Women who undergo IVF experience tremendous stress. Partners lament the absence of intimacy during IVF, the procedure remains costly, and perceived infertility brings a heavy emotional toll. The study tested the hypothesis that stress diminishes the effectiveness of IVF, positing that exposure to medical clowns shortly after an Embryo Transfer (ET) procedure may reduce the patient’s stress level, thereby enabling successful impregnation. Among 219 patients participating in the study, 110 were in the clown intervention group; the other 109 women were in the control group. Friedlerat’s team observed 16-percent improvement in the IVF success rate for the women entertained by clowns.

Dr. Neal Goldberg finds such results encouraging. His wife was a pioneer recipient of IVF treatment, and his four children were all the result of successful ET procedures performed when the science was still in its infancy.

“The study coming out of Israel really corroborated my theory, emphasizing that humor can help couples deal with the lack of intimacy,” Goldberg tells JNS.org.

Goldberg is the founder and executive director of Lev Leytzan (Hebrew for “Heart of a Clown”), an organization based in Lawrence, N.Y., which initiates collaboration between medical professionals and a highly trained troupe of therapeutic clowns. Lev Leytzan brings clowning to hospitals, nursing homes, senior centers, special-needs camps, and private homes in the United States and abroad. Since founding the organization in 2003, Goldberg has helped train nearly 1,000 clowns. Many are volunteers as young as 12. Others are paid professionals.

“We’re not an entertainment troupe,” Goldberg says. “Were trying to create meaningful creative engagement with people.”

Initially, the focus was to “work with Jewish youths in our community and expose them to the greater world at large,” he says. Lev Leytzan began by taking clowns to Israel to help terror victims. The organization later added missions to Europe, where the clowns provide therapy for Holocaust survivors. Now Goldberg’s team is focused on duplicating the success the Israeli IVF study achieved. Likewise, Goldberg is expanding his vision for medical clowning, embracing another ailing community: senior citizens.

Lev Leytzan doctors and clowns recently launched a pilot geriatric patient-focused program called “ElderHearts.” The stated goal is to provide “Alzheimer’s and dementia patients with interactive experiences designed to help them reconnect with the world and alleviate the loneliness and isolation they feel.” Before tackling the most severely affected patients, however, Lev Leytzan is taking a more general approach, assessing the effectiveness of its methodology.

The clowns work in dyads. They enter only with the patient’s permission, and they allow the patient or the doctor to lead off. To establish a familiar role, the clowns wear vintage costumes and use props from the 1930s through the 1950s, artifacts that evoke rich memories.

“We join them in their reality, [utilizing] problem-solving, reminiscence, and improvisation,” Goldberg explains. When “one Alzheimer’s patient refused to take her medications,” he recounts, offering an example of the clowns in action, “we threw a tea party, began toasting old friends and old times while we carved the cake, and the patient swallowed her pills.” Indeed, a spoonful of humor makes the medicine go down.

“Unlike most people in the hospital, we are not bound by time or space or reality,” Goldberg says. “We can spend as much time as we like. We talk to the nurses and staff beforehand, find out who has had a rough day and needs cheering.”

The medical and psychosocial teams (graduate and doctoral students) at the Margaret Tietz Nursing and Rehabilitation in Jamaica, N.Y., observe the Lev Leytzan clowns and collect data.

“ElderHearts” may require adjustments in strategy and narrower parameters before an official study like the one conducted in Israel yields meaningful quantitative data. But in the meantime, the program’s troupe of students, doctors, and volunteers are at the very least putting smiles on the faces of senior citizens in need. Thanks to Lev Leytzan, “I can visit people who are lonely, in pain, and extremely vulnerable,” says Natan Davidowitz, a 12th-grade student based in West Hempstead, N.Y., and a regular volunteer clown.

Davidowitz says that he is enthusiastic about wearing makeup and smiling “shamelessly, [to] make people in hospitals feel like they are important enough for someone to spend time with them in a way that solely focuses on making them happy.”

Patch Adams would call that a “win,” regardless of the outcome of medical treatment.