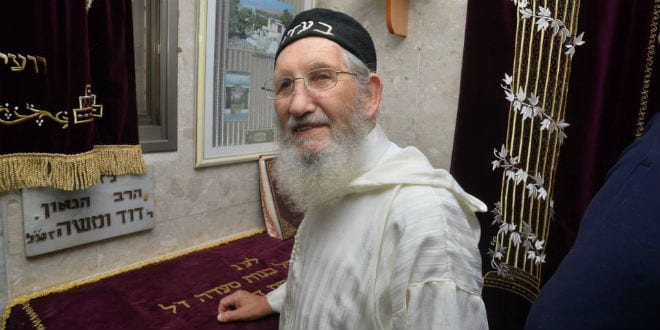 Mystical rabbi Rabbi Amram Vaknin, from the port city of Ashdod in Israel’s south, has become known in recent years for receiving a series of prophetic-like messages from Heaven. His most recent message occured this past Thursday evening, November 26, when Rabbi Vaknin was praying with a group at the cave of Elijah the Prophet in northern Israel. According to witness accounts, his soul went up to Heaven and brought back an urgent message concerning the recent terror wave in Israel.

Accompanied by a group of 60 Jewish men and women, Rabbi Vaknin was being wheeled away from the cave when he received the latest prophetic-like transmission. He was in this altered state of consciousness for close to 20 minutes. The event was captured on video.

The core theme of his most recent message is that the Jewish people have the power to stop the spilling of blood on the streets of Israel by coming closer to God. As the world hurtles toward the Messianic process, God is trying to wake up the world to the critical, life-saving importance of repentance.

According to Rabbi Vaknin, the Jewish world is running out of time. The stabbings, car rammings and shootings are very stern warnings to the Jewish people to repent and to return to a state of humility when it comes to their relationship with God and with one another.

Gil Nachman, who accompanies Rabbi Vaknin at his prayer gatherings and who is his English-language spokesperson, told Breaking Israel News, “These decrees that are coming are because we have to repent, mostly from the inner, hidden sins. People have to say to Hashem (God) ‘I want to look good in Your eyes.’ We have to purify the inside first.”

Responding to Vaknin’s critics, Nachman addressed the frightening nature of the current and previous warnings. “Leaders are telling people not to scare Am Yisrael (the Jewish people). The things that are happening now are not scary enough for people? Whatever he [Rabbi Vaknin] said, happened. He never had the intention to scare the crowd,” he told Breaking Israel News.

“Some people come to Hashem with love and some with fear. Now the way we see things, it looks like Hashem wants to scare us,” Nachman continued. “There are people who won’t do teshuva (repentance) unless they get scared. The time of doing teshuva from love is past. Now there’s no time! So Hashem is bringing us to to do teshuva from fear.”

In his interview with Breaking Israel News, Nachman emphasized that the situation is turning critical. Time is very short and the violent events in Israel and around the world are going to increase in frequency and intensity as the Messiah’s appearance gets closer. He urged everyone, including the leaders of the Jewish people, to take the warnings of Rabbi Vaknin to heart and to work diligently on repairing their relationship with God and His laws. As Nachman explained, true repentance is the only way to avoid more bloodshed.

Improving our relationships with God at this precarious time is urgent. This message is even being sent through the mouths of our enemies,  “When the Muslims say Allahu Akbar [God is the greatest] before they commit an act of terror, they are reminding us of God. To wake us up,” Nachman explained. The Jewish people must pray for God to have mercy. “People have to demand Moshiach, demand the kingdom of David and the Third Temple,” he clarified.

Each time the soul of Rabbi Vaknin ascends to Heaven, he brings back prophetic messages for Israel. On October 12, Breaking Israel News reported the Rabbi’s message that Jewish blood was going to be being spilled in Israel. Sadly, his warning turned out to be accurate.

The Israel Ministry of Foreign Affairs reported that, according Magen David Adom, 22 people were murdered and 211 were wounded, including 21 seriously wounded, on the streets of Israel since mid-September. The latest data available from the Israel Defense Forces shows that, as of November 29, there have been 80 stabbings, 29 shootings and 10 car rammings.