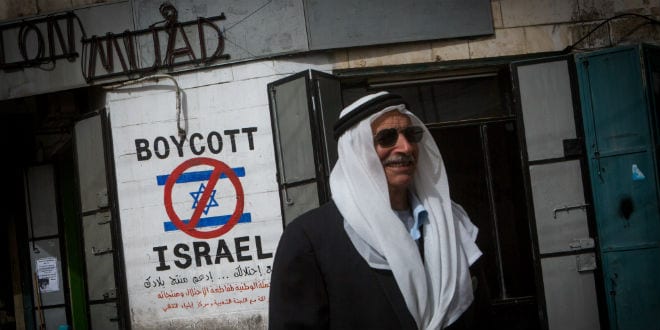 Black Friday and Cyber Monday are upon us, and this year, several Israeli vendors are hoping to appeal to consumers on two fronts: fight BDS and save money.

Black Friday is primarily an American phenomenon, but with the growing popularity of e-commerce, its sales are becoming ubiquitous worldwide. While in the past many Jewish stores shied away from Black Friday marketing, perhaps to avoid associations with Christmas, in recent years Black Friday sales have become more acceptable.

With the influence of the BDS movement spreading rapidly, and especially in the wake of the European decision to label products made in Judea and Samaria, some Israeli vendors are marketing Black Friday as a way of showing Blue and White support.

Encouraging shoppers to “buy Blue and White” gifts from Israeli artists, musicians and authors, Israel365’s online store is offering 33% off all purchases made from Black Friday through Cyber Monday.

“Instead of just complaining about the Boycott, Divestment and Sanctions (BDS) movement, Israel supporters can do something positive by buying their holiday gifts from Israel, and they are in increasing numbers,” Rabbi Tuly Weisz of Israel365 told Breaking Israel News.

Offering its first Black Friday sale over last year, Judaica Web Store CEO Arik Barel told PRNewswire service at the time, “We’re still Jewish, we’re still Israeli, but in order to compete, we have to cater to our customers. And many of our customers are based in the US and are used to seeing ‘unbelievable’ prices on Black Friday. What we offer are good bargains on Jewish gifts with meaning and a connection to Israel.”

One online retailer launched a new site to appeal directly to American consumers.

AZEverythingJewish sets out to enlist “the American People in response to the terrorist attacks overseas to support the Pioneers of Judea and Samaria who live in the constant cross-hairs of terror and whose very livelihoods have been decimated by those who would boycott Israel and the goods raised and produced in these areas.”

Their solution: a subscription to their Lev Haolam Package Project, which will see new products sent monthly to your door, made in the Biblical heartland. The purchase of goods for these packages supports small businesses in Judea and Samaria, which serve as the heart of the region’s economy.

Another ecommerce site supporting more than 2,500 Israeli businesses in Judea and Samaria is Boutique Katom. According to owner Gedalya Blum, “BDS’s actions, especially from the EU who calls on Israel to relinquish the Golan to Syria, illustrates how little they care about creating a peaceful region and more about destroying Israel.”

“It is important to find strength from within and throughout the world and to connect with friends. Political talk has not worked to beneficial Israel’s cause, what works is economic strength and development,” Blum told Breaking Israel News.

According to data collected by e-commerce marketing platform Remarkety, the US is second in the world in e-commerce spending, with $349.06 billion dollars spent in 2015. According to their statistics, 57.4 percent of Americans shop online and 72 percent of online sales in the country are completed on a computer rather than a mobile device. Additionally, according to a survey conducted by Ipsos for Google, 40 percent of all holiday shopping takes place online.