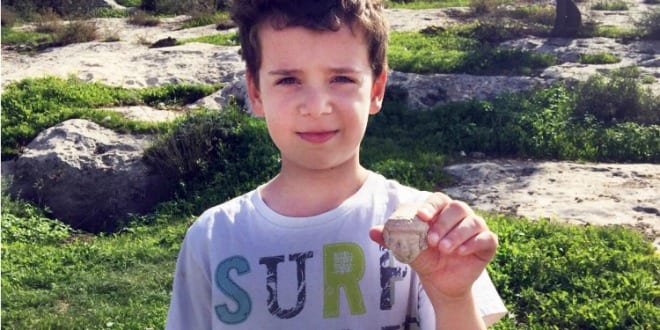 An 8-year-old Israeli child made a significant archaeological discovery while hiking with his family in the Judean Foothills region, west of Jerusalem. He found a figurine head of a fertility goddess that dates back to the days of the first biblical Temple.

The discovery was made this last weekend while the Halperin family went hiking in Tel Beit Shemesh, where an ancient biblical city once existed. During the hike, eight-year-old Itai Halperin picked up a round ceramic object from the ground. When he examined the object, he was surprised to see that it had the head of a figurine.

The family immediately reported the interesting finding to the Israeli Antiquities Authority (IAA). While meeting with Alexander Glick, an archaeological inspector from the Emek Hefer and Sharon district, Itai found out that he had discovered a historically significant artifact.

Itai said that he recently watched an ‘Indiana Jones’ movie and decided to be like him when he grows up. Finding the figurine is a real dream come true for him.

Alon de-Groot, an IAA expert on the Iron Age, recognized the artifact as a figurine head of the fertility goddess. “These figurines of naked women symbolizing fertility, were common in houses of residents of the Judean Kingdom between 800 and 586 BC, when the Babylonians destroyed the kingdom in the days of Zedekiah.”

De-Groot added that these figurines “serve in research as a means of identifying the Judean Kingdom ruling area.”

Anna Airich, an IAA archaeologist in the Judea district, said: “It is not by chance that this figurine was discovered at the peak of Tel Beit Shemesh, next to a residential area from the First Temple era. Beit Shemesh is mentioned in the bible as a city in the heritage zone of the Judean tribe.”

“Every summer excavations are carried out in the mount by Tel Aviv University researchers, which show that during the First Temple era a big city existed there,” added Airich.

“The city was surrounded by a wall, included many residential and public buildings, and was an industrial-commercial center. It was destroyed by Assyrian king Sennacherib in 701 BC, and the complete destruction was done in 586 BC by Babylonian king Nebuchadnezzar.”

The IAA praised 8-year-old Itai for his good citizenship in delivering the artifact. They explained that it’s important to call archaeologists and not remove the artifact from the place it was originally found. This ensures that the archaeologists can extract all the relevant information in the best way possible.

The Israeli Antiquities Authority will grant Itai an appreciation certificate, and his class from school will be invited to participate in one of their excavations and see the national treasures.