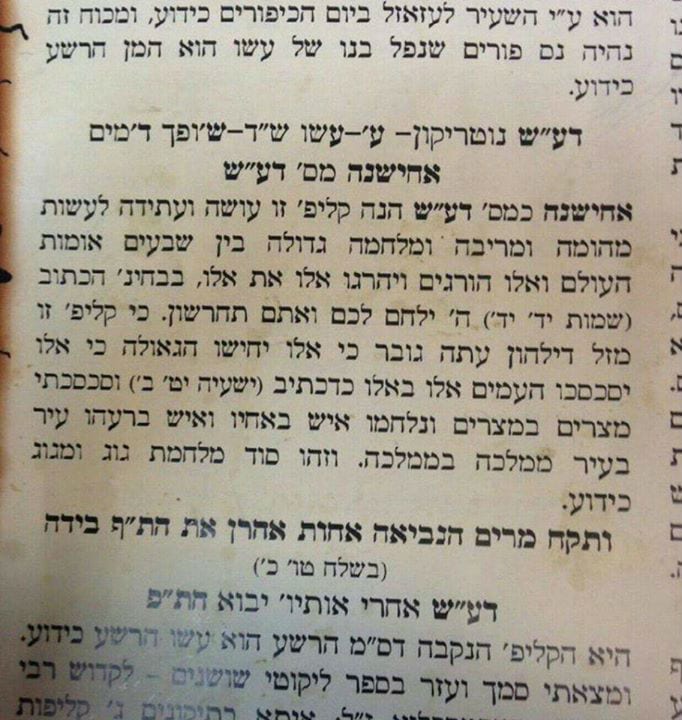 A remarkable post has been making the rounds on social media lately, causing many to jump to certain “prophetic” conclusions about the future.

The post first appeared on the social media platform Whatsapp, under the heading “250-year-old book foresees the rise of ISIS”.  It spread quickly to other platforms and was viewed by thousands. The post, showing a page from an ancient text allegedly predicting ISIS, is, unfortunately, a hoax.

The post shows a page from the Yalkut Shimoni, a collection of Biblical commentaries believed to have been compiled around the 13th century. The section featured on the post predicts the rise of the Islamic State (ISIS), which is known in Arabic and Hebrew as Daesh.

The text, badly photo-shopped to look antique, states that ISIS (דאע”ש in Hebrew, though spelled in the text as דע”ש) is an acronym for Shofech Dam Esav (שופך דָם עֵשָׂו), spilling the blood of Esau. Its numerological value is equivalent to Achishena (אחישנה), a word from Isaiah 60:22, meaning “I will hasten it.” This is a kabbalistic expression used to describe an action that hastens the coming of the Messiah.

In the photo, the section describing ISIS appears adjacent to the Yalkut Shimoni’s commentary on Exodus 15:20, “Then Miriam the prophetess, the sister of Aaron, took a tambourine in her hand.” However, the section about ISIS does not appear in the original text.

Daesh, according to the text, ISIS destined to make a great commotion in the world, causing a massive war between the 70 nations. The text predicts that everyone will be killing each other, quoting the verse in Exodus 14:14, “The Lord will fight for you; you need only to be still.” It reiterates this point by sourcing a quote from Isaiah 19:2, “So I will incite Egyptians against Egyptians; And they will each fight against his brother and each against his neighbor, city against city and kingdom against kingdom.” The text concludes by saying, “This is the secret of the war of Gog and Magog.”

The actual source of the text concerning ISIS is in fact from a book written last year by Kabbalistic Rabbi Chaim Gad Edni.

The Hebrew language website Hidabrut spoke to Rabbi Edni about the confusion, where he explained, “I wrote it last year. I quoted it for an article published in a pamphlet distributed for Shabbat [last weekend]. The person who made it look like it was from the Yalkut Shimoni, or a similar ancient book, called me to apologize. He did so thinking that it would make people take it more seriously.”

The pamphlet was distributed by Rabbi Edni’s yeshiva, Ohr Chai, in Jerusalem. On the front page of the pamphlet it is clearly indicated that the article is an excerpt from Rabbi Edni’s book, Machamdei Aretz (Lovers of the Land of Israel). However, it was posted on social media without the disclaimer.

There are many amazing examples of accurate predictions in sources describing current events in a messianic context. This, however, is not one of them.