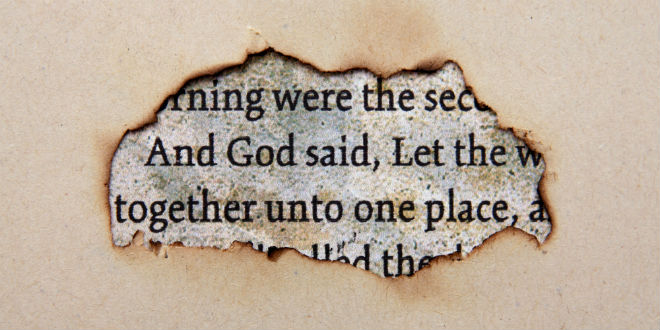 Scientists have struggled for years trying to understand the source of Earth’s oceans and the planet’s water. Until recently, the prevailing scientific theory held that icy comets hit the Earth while it was still forming. A discovery last year by geologists seems to prove that the real source of the earth’s water is from deep underground, amazingly similar to the Bible’s account of creation, which described waters below and waters above (Genesis 1:7).

The first clue came in the form of a battered diamond found in Brazil. Graham Pearson, lead study author and a geochemist at the University of Alberta in Canada, discovered the diamond quite by accident while searching for a means of dating the diamonds. Diamonds that have come up from so deep from the earth are usually discarded by diamond miners since they are scarred and discolored, having little commercial value. This diamond contained a rare mineral called ringwoodite, which has never been found on the planet’s surface before. It only forms under extreme pressure and is only found in meteor fragments or is artificially made in laboratories.

The diamond was brought up from the earth’s mantle region, which stretches from 254 to 410 miles deep, by volcanic activity. The mantle, the hot rock layer between the crust and the core, makes up most of the earth’s volume. It has never been explored since it is incredibly deep and inaccessible, and the geothermal energy at that depth would melt any drill bit.

The ringwoodite found embedded in the diamond was 1.5 percent water, contained not as a liquid but as hydroxide ions (oxygen and hydrogen molecules bound together). This suggests there could be a vast store of water in the mantle transition zone.

“It translates into a very, very large mass of water, approaching the sort of mass of water that’s present in all the world’s oceans,” Pearson told Live Science’s Our Amazing Planet.

Brandon Schmandt, a seismologist at the University of New Mexico, set out to test the theory. Using the Earthscope USArray, a network of portable seismometers across the United States, he found the waves slowed down upon reaching the layer of ringwoodite, indicating that they were passing through water as well as rock and confirming that the transition zone is an enormous water reservoir.

“The surface water we have now came from degassing of molten rock. It came from the original rock ingredients of Earth,” Schmandt told Live Science.

One of the researchers with Schmandt said that if conditions had been slightly different, and the water was not stored underground, “it would be on the surface of the Earth, and mountaintops would be the only land poking out.”

While critics of the Bible claim Biblical stories are improbable and lack factual basis, scientists and archaeologists are discovering that in many cases, the Bible is an accurate guide for their investigations.