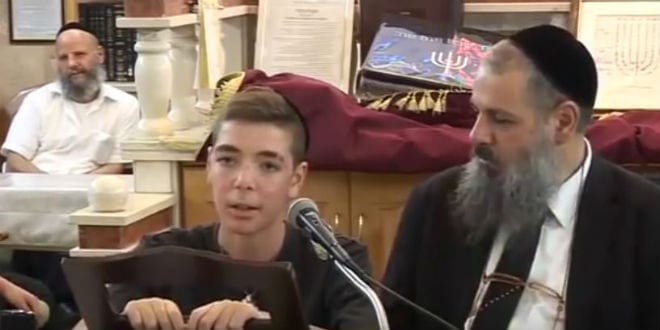 BIN EXCLUSIVE: Leading international body language expert Susan Constantine weighs in on whether Natan is being truthful about his near death experience.

A 15-year-old secular Israeli boy named Natan had a near death experience on Monday, September 28, 2015 and returned to life describing Biblical prophecies about the End of Days.

In a video posted on YouTube, Natan is shown speaking to an Orthodox Jewish audience in a synagogue in Israel, just days after his near death experience. He relates his understanding of what was revealed to him in the next world during the 15 minutes that he was pronounced clinically dead.

Rabbi Rami Levy, who sits beside Natan and helps the teen tell his story, claims that Natan did not study in a Jewish religious school and did not learn the things he spoke about from the Bible. Levy himself was raised in a secular, anti-religious Israeli family. In 1982, while performing reserve duty in the Israeli army, he survived the Lebanon War through a miracle of Divine intervention. Levy subsequently became religious and was eventually ordained as a rabbi.

Natan’s near death experience happened on the first night of this past Sukkot, which was also the night of the final Blood Moon. At the home of his uncle, where he went to visit for the holiday, Natan began feeling unwell. He described suddenly shivering and felt cold in his arms and legs. Natan decided to go and rest and, in those moments, felt his soul exit his body through his nose.

Among the various spiritual messages experienced by Natan, which can be heard beginning at the 35 minute mark of the video, the young boy speaks about the messiah standing on the Mount of Olives and determining who is worthy to be saved. Natan describes this future scene saying that “the mountain simply opens…it splits in two,” though not by earthquake and not by atomic bomb. This vision matches a prophecy in Zechariah that the Mount of Olives, located just east of the Old City of Jerusalem, will split and create a valley.

“And on that day His feet shall stand on the Mount of Olives, which is before Jerusalem from the east. And the Mount of Olives shall split in the midst thereof-toward the east and toward the west-a very great valley. And half the mountain shall move to the north, and half of it to the south.” (Zechariah 14:4)

In describing the qualities of the messiah, Natan said, “The Mashiach (messiah) is first of all someone who can’t sin. Someone who repented. Who didn’t commit any transgressions. It can’t be that the Mashiach is someone who committed transgressions. Now it can be someone who we actually know very well. Lots and lots of people know him, according to what I understood. But everyone will be very, very surprised that he is of all people the Mashiach.”

Just before the 36 minute mark, Natan claims that the messiah will kill Gog, the leader of the nation of Magog, who will be a critical player in the final war of Gog and Magog and will bury him in Israel. This claim is consistent with a prophecy in Ezekiel that Gog will be buried in Israel.

“And it shall come to pass on that day that I will give Gog a place there as a grave in Israel, the valley of them who pass along the east side of the sea, and it will then stop those who pass along. And there shall they bury Gog and all his hordes, and they shall call it the Valley of Hamon Gog.” (Ezekiel 39:11)

Toward the end of the portion of the video, Natan describes the power of the Messiah to discern a person’s holiness. “I also saw that the moment Har haZeitim (Mount of Olives) splits into two, then the Mashiach will stand at the entrance, but he won’t…he won’t see who is religious, who has a beard and who a person is. What he will see is – he sees according to a person’s holiness, he will smell each person, he will smell if someone has holiness, if he is pure, if he did mitzvot (God’s commandments), if he performed acts of kindness. To see if he really has true fear of Heaven and not just fear of punishment, and things like that.”

BIN EXCLUSIVE: Near death experience rabbi recounts his other harrowing brush with prophecy.

The idea that the messiah will be able to discern the righteousness of a person based on something other than physical appearance is reflected in a prophecy from Isaiah that describes the gifts of the messiah, including the ability to judge without relying on what his eyes see or what his ears hear.

“And he shall be animated by the fear of the Lord, and neither with the sight of his eyes shall he judge, nor with the hearing of his ears shall he chastise. (Isaiah 11:-3)

The release of the video has caused two types of major reactions – amazement mixed with fear or incredulity and denial. Susan Constantine is a world renowned body language expert specializing in deception detection. She has appeared as an expert on television and radio shows and in print publications in the US and abroad over 1,000 times. She reviewed the video at the request of a client.

Although she is not an expert in the Jewish content of Natan’s testimony, Constantine verified the credibility of Natan’s presentation. In a statement she provided to Breaking Israel News, Constantine asserted, “I have reviewed the entire video and it is my professional opinion the boy Natan truthfully believes he experienced a visitation in heaven and was not being deceptive.”

The Hebrew video that was first released in early October is nearly two hours long. A partial version with English subtitles was released earlier this month.