Yehudah Glick: The Time Has Come for Israel to Stop Apologizing Over the Temple Mount

Home » Yehudah Glick: The Time Has Come for Israel to Stop Apologizing Over the Temple Mount 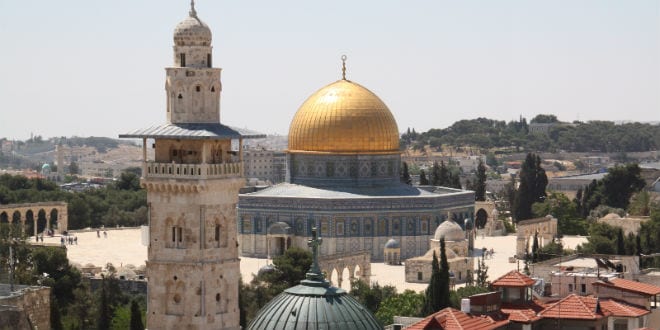 The Temple Mount is the “number one Jewish venue” and Israeli politicians need to stop apologizing for it, said Temple Mount Heritage Foundation founder Rabbi Yehudah Glick in agreement with comments made by Israeli officials last week.

During last week’s Jerusalem Post Diplomatic Conference, when asked about the Israeli-Palestinian peace process, Israeli Prime Minister Benjamin Netanyahu explained that one of his unshakable “solid principles” is that “the Palestinians will have to finally recognize the Jewish state.”

“They cannot ask for a nation-state for themselves and not accord one to us. After all, we’ve only been here about 4,000 years. We have some connection to this land, to this city [of Jerusalem],” he said to applause.

“Four-hundred yards from here is David’s City and an equal distance the Temple Mount. It’s named the Temple Mount because on this mount was a temple, the place where Abraham first visited and Solomon built the Temple and Jesus overturned the money tables, the money changers table, on that Temple,” the prime minister explained. “All of this from Solomon’s time to the rise of Islam and preceded Islam by 1,500 years. We have some connection, modest, to this land, to this city, to this mount. And yet we recognize that there is another people here and were willing to forge a peace.”

In response to the prime minister, Glick, whose known internationally for his work in opening up access to the Temple Mount for people of all religions, said to Breaking Israel News, “I’m very happy that Netanyahu, in front of all the diplomatic representatives in Israel from all over the world, said it loud and clear, without apologizing for anything.”

“While talking with [US Secretary of State] Kerry and [Jordan’s] King Abdullah, Netanyahu repeated again and again the status quo and political arrangements. But we didn’t hear loud and clear a statement about the fact that the place of the Temple Mount has in Jewish life.”

When asked whether the prime minister’s comments are a way to counter Palestinian attempts to change the narrative and history of the Temple Mount, Glick told Breaking Israel News, “It definitely is because the Palestinians are not afraid to say again and again that this is a Muslim place and only Muslims have a right to come here, that Jews have no right to the place.”

While Glick waxed poetic about the prime minister, he offered some harsh truths to opposition leader Issac Herzog who warned Jewish presence on the holy site will only continue to feed the flames of tension between Israel and the Palestinians.

Ahead of the conference, Herzog called out Temple Mount activists in an interview with The Jerusalem Post, saying that those who encourage others to visit the Temple Mount are “hypocritical” because “even the strictest Zionist yeshiva oppose it.”

“As leaders, we have to prevent actions that can have consequences we don’t understand,” Herzog said, citing a ruling by his grandfather, former chief Rabbi Yitzchak Halevi Herzog. Following the War of Independence in 1948, Rabbi Herzog instructed soldiers who ascended the mount to quickly leave and “lock the place up and throw away the key.”

In response, Glick told Breaking Israel News, “It was unfortunate to hear that Herzog starts teaching us rabbinical law, playing the rabbi. When was the last time he followed rabbinical authority? Suddenly here, when it comes to the Temple Mount, he finds himself in the footsteps of rabbinical authorities.”

While Glick may not agree with Herzog’s views on whether Jews should be allowed to ascend the Temple Mount, he did praise the opposition leader for his acknowledgement of the holy status of the site for the Jewish nation.

“It’s very refreshing to hear the unanimous agreement between Prime Minister Netanyahu and the opposition leader Herzog on the fact that the Temple Mount is the most holy place in the world for the Jewish people,” he said to Breaking Israel News. “It was very important that the prime minister of Israel, together with the head of the opposition, both said without apologizing that the Temple Mount is the number one Jewish venue.”