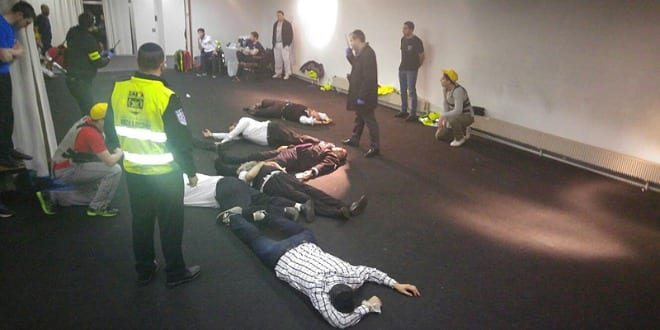 In the shadow of last Friday’s terror attacks in Paris, and given the ongoing and increasing threat level of new ISIS attacks in Europe, ZAKA, the voluntary community emergency response organization, on Sunday offered a two-day emergency drill with ZAKA Belgium, in cooperation with the Jewish community of Antwerp.

The training had been planned before the Paris terror attacks, but took on even greater resonance in light of the weekend’s events.

ZAKA International Rescue Unit Director Mati Goldstein, who traveled from Jerusalem to lead the training, said in a statement: “The stress in the air after the terror attacks in Paris was palpable, especially due to the fact that the terrorists’ base of operations was in Belgium. There is an increased police security force presence on the streets and in places that are full of people. As a result, the participation in the drills and exercises was very high, as was the level of cooperation with the local community.”

ZAKA Chairman and Founder Yehuda Meshi-Zahav stated: “Sadly, we are witnessing an increase in the levels of international terrorism. As an international humanitarian volunteer organization, we at ZAKA invest significant financial and human resources in maintaining high levels of readiness among Jewish communities around the world and ensuring that they have the knowledge and tools to deal with emergency situations as and when they happen in their region.”