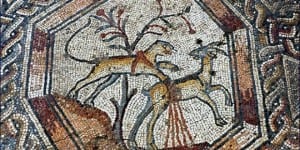 The Israel Antiquities Authority (IAA) and the Lod municipality are inviting the public this week to view the most recently discovered parts of a unique villa dating back to the 4th century CE.

“What is special about this discovery is that we’ve almost finished uncovering the whole Roman villa,” said IAA archaeologist Dr. Amir Gorzalczany, to Tazpit Press Service (TPS). The villa was already partially discovered in the 1990s when the Israel Antiquities Authority was inspecting development work prior to the construction of Highway 90.

Gorzalczany described some of the villa’s aesthetic attributes to TPS. “The villa is a very beautiful house with four wings and covered by a beautiful colorful mosaic that was very skillfully made,” he said.

“On the mosaic, there are very interesting motifs such as animals, flowers and geometric motifs which are very similar to those on mosaics discovered in North Africa,” added Gorzalczany. “It is the first of its kind found in Israel.”

The villa was apparently owned by wealthy individuals and located in an upper-class neighborhood.

“This villa probably belonged to members of the upper class in the city of Lod during the Roman period, in a neighborhood where the economic, cultural and political elite of the city were primarily concentrated,” Gorzalczany said to TPS. “They were apparently affluent enough to afford such a beautifully designed house.”

Gorzalczany also argued that the size was another important factor depicting wealth. “It’s not only the beautiful mosaics, ceramics and glass but also the size of the villa, which demonstrates the affluence of those who lived in the house,” Gorzalczany told TPS. “The villa is composed by four wings, the lounge, the courtyard, corridor and individual rooms.”

The villa was originally discovered in 1996 by Miriam Avissar, who was only able to uncover the floor of the villa’s lounge. The rest of the villa was exposed during an excavation that was conducted between June and November of 2014, by a team of IAA archaeologists among which included Hagit Torgë, Uzi ‘Ad, Eriola Jakoel and Yossi Elisha.

“It was our discovery of the rest of the villa last year that helped us to understand the house’s general layout,” Gorzalczany noted to TPS. Gorzalczany said that the eastern part of the complex could not be uncovered since it is located beneath existing buildings in the locality.

The excavation last year was originally undertaken to construct the “Shelby White and Leon Levy Lod Mosaic Center,” which will be a visitor center for the mosaic that was discovered in 1996. The mosaic is currently on display at the Cini Gallery in Venice, Italy and will return to the visitor center after its exhibition tour. Other recently discovered parts of the villa will also be incorporated into the visitor center.