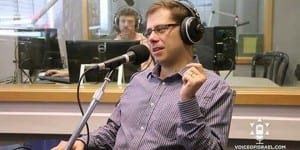 Eugene Kontorovich, a legal scholar whose specialties include international law, on Friday published an op-ed in the NY Times that could stir up a backlash over in Brussels. Titled, “Europe Mislabels Israel,” Kontorovich’s piece rebukes the EU Commission for breaking EU laws in its zeal to attack the Jewish State.

“Diplomats in Brussels and NGOs have made clear that more coercive measures will follow,” Kontorovich writes, suggesting the EU has initiated a “process of building a legal ghetto around Israel, within which a special set of rules applies.”

“The European Union allows Morocco — which has extensive trade ties with Europe, but has occupied Western Sahara since 1975, and populated it heavily with settlers — to export products from its occupied territory labeled ‘Made in Morocco,’” Kontorovich notes, pointing out that, “when challenged, the commission formally declared that labeling such goods as ‘made in’ Morocco is not misleading, and is consistent with European trade agreements.”

But wait, there’s so much more: European courts have already examined and rejected the EU Commission’s notion about extending “consumer protection” to shoppers deciding whether or not to buy Israeli products. “Just last year, the British Supreme Court ruled, in a case involving Ahava beauty products produced in the West Bank, that ‘there was no basis for saying that the average consumer would be misled’ by a ‘Made in Israel’ label.” Just as the EU decided in the case of Moroccon product from occupied Western Sahara, so did the UK court hold that the labeling “was not deceptive as a matter of both British and European Union law,” Kontorovich states.

“The problem is not that the European Union fails to live up to its standards in some cases, like that of Morocco,” he argues, “Rather, in these other cases the union explicitly denies the existence of these standards.”

This, in Kontorovich’s opinion, “is a legal violation in its own right. The European Union’s foundational treaties require regulatory ‘consistency.’ And discrimination against trading partners represents a core violation of the General Agreement on Tariffs and Trade and other treaties of the World Trade Organization.”

How should the US respond to this obvious violation of the EU’s own trade laws, never mind the international trade agreements to which the EU is a signatory?

On Wednesday, Mark C. Toner, US State Department Deputy Spokesperson told reporters: “We understand the objective is to provide EU consumers correct information on the origin of products, as required by EU law. … The EU has made clear that measures are not a boycott, and the EU has also made very clear that they oppose boycotts against Israel. EU guidelines for products that are sold in EU countries are for the EU to determine.”

Not true, writes Kontorovich, who believes “the European Union labeling threatens to establish a precedent that would allow politicization of the system, undermining United States economic interests in broad and unpredictable ways. Thus it is not surprising that earlier this year, the United States passed a law opposing such European Union measures against Israel.”

A) IN GENERAL.—With respect to an agreement that is proposed to be entered into with the Transatlantic Trade and Investment Partnership countries and to which section 103(b) will apply, the principal negotiating objectives of the United States regarding commercial partnerships are the following:
(i) To discourage actions by potential trading partners that directly or indirectly prejudice or otherwise discourage commercial activity solely between the United States and Israel.

(iii) To seek the elimination of state-sponsored unsanctioned foreign boycotts against Israel or compliance with the Arab League Boycott of Israel by prospective trading partners.

(B) DEFINITION.—In this paragraph, the term “actions to boycott, divest from, or sanction Israel” means actions by states, non-member states of the United Nations, international organizations, or affiliated agencies of international organizations that are politically motivated and are intended to penalize or otherwise limit commercial relations specifically with Israel or persons doing business in Israel or in Israeli-controlled territories.

In reading both Kontorovich’s well founded opinion, and the Cardin amendment, it appears that the EU Commission’s ruling is actionable, both in the US and in Europe.