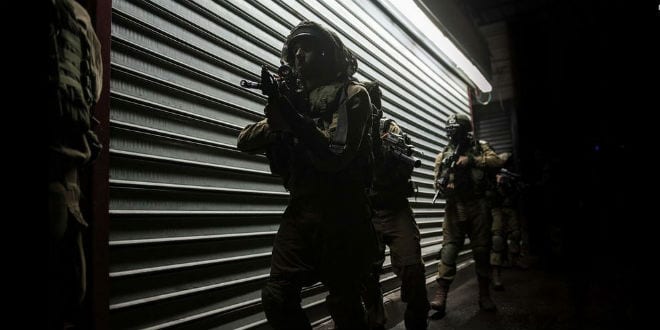 Early Tuesday morning in a joint operation by the IDF, the Israel Police and the Israel Security Agency (Shin Bet), a Hamas terror cell in the Arab town of Kalkilya in the Judea and Samaria region was raided and 24 Hamas operatives captured.

The raids targeted the local Hamas commander, whose work to renew and bolster Hamas presence in the region included “preparing the ground for terrorist activities”, according to the Shin Bet. Several other senior Hamas officials were also apprehended.

The Shin Bet added that the Hamas operatives were organized, receiving instructions and funding from Hamas headquarters in the Gaza Strip and the Arab state of Qatar.

Security forces raided known addresses of terrorist operatives and arrested 24, several of whom had served jail time for terrorist- and Hamas-related activities in the past. A sum of NIS 35,000, ammunition and a firearm were also seized.

According to the Shin Bet, the terrorist network is well-established in the Judea and Samaria region.”The Hamas infrastructure in Kalkilya is one of Hamas’s oldest in the West Bank,” the agency said, adding, “This episode uncovers the ongoing activities of Hamas headquarters abroad and in the Gaza Strip, as well as the activities of local West Bank infrastructures, to realize their goal of building up their forces, with a view of reaching organizational and military readiness.”

Their ultimate goals, said the agency, are to “carry out terrorist attacks and engage in military activity against Israeli targets.”

An additional 12 suspects were arrested for unorganized terrorist activities and violent disturbances targeting civilians and security forces, bringing the total number of arrests to 36.

Raids took place near the largely Arab towns of Nablus, Bethlehem, Jericho and Jenin. Undercover soldiers from the elite combat unit Duvdevan took part, as well as the Egoz commando unit of the Golan brigade and the Duchifat battalion of the Kfir infantry brigade.