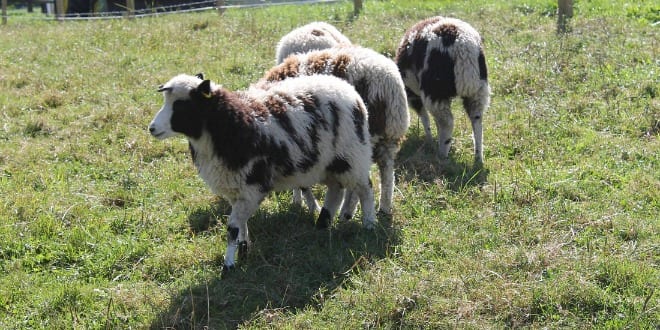 Gil and Jenna Lewinsky, a Jewish couple who met in Israel and are now living near Vancouver, British Columbia, Canada, claim to have a flock of sheep that descend from the Biblical sheep of the Biblical forefather Jacob. The Lewinskys are attempting to return the sheep, and themselves, to the Land of Israel.

Gil, who cares for the nearly 70 sheep on a farm in Canada, explained the uniqueness of this particular flock. “They are the only sheep breed in the world to produce spots and speckles in offspring,” as described in Genesis 30:32, he explained to Breaking Israel News. Although there are other Jacob Sheep in Canada, the Lewinskys claim to have the largest flock.

According to Gil, Jacob Sheep, “are one of the oldest sheep breeds in the world, with genetics that go back 3,000 years to Laban and Jacob.” In addition to their rare spots and speckles, unlike most sheep breeds, both male and female Jacob Sheep have horns, often more than one pair.

The Lewinskys are currently raising funds to bring their flock of Jacob Sheep to the Golan Heights in northern Israel. They plan to open a Heritage Park as a tourist attraction in Israel to enable people to see the Biblical sheep for themselves. Lewinsky told Breaking Israel News that the planned Heritage Park will have another, loftier purpose.

“We wish to open a Heritage Park for the Jacob Sheep in Israel. Yes, it will be a tourist attraction, but its primary focus is rather to conserve the breed of sheep and to bring it back to its original use,” he explained. “There will be a woolery at the Heritage Park which will turn the raw wool (the sheep produce 5-6 pounds of it per sheep per year) into religious clothing such as tzizit (prayer fringes), shirts and prayer shawls. The horns can be crafted into shofars.”

The Biblical instrument known as a shofar, still in Jewish ritual use today, is commonly made from the horn of a ram (male sheep). In the Book of Joel, the shofar is associated with the arrival of the Messiah.

“Sound a shofar in Zion and sound an alarm in My holy mountain; all the inhabitants of the land shall quake, for the day of the Lord has come, for it is near.” (Joel 2:1)

The flock’s current location in Canada also has Biblical significance, as expressed in a verse from Jeremiah that speaks of a flock of sheep coming from the north:

“Lift your eyes and see those coming from the North. Where is the flock that was given you, the sheep of your glory?” (Jeremiah 13:20)

The Lewinskys face bureaucratic challenges returning their flock of Jacob Sheep to Israel. They turned to Rabbi Amram Vaknin, the mystical rabbi from the city of Ashdod, to ask whether they should give up their dream of returning the descendants of the Biblical Jacob’s sheep to Israel. Vaknin gave them encouragement, saying that the sheep don’t belong in Canada but “back in the land of Israel.”

Lewinsky told Breaking Israel News that Vaknin’s encouragement, “[G]ives us confidence to continue despite any challenges we occasionally face. About the second part of his advice (that the sheep must be escorted to Israel by Torah-observant Jews), we believe he was reaffirming what we have seen ourselves with the sheep. You have to be God fearing and honor the traditions of the Torah to work with the sheep. It is a very special mission to return them to Israel. We agree fully with his advice and insights.”

“The sheep can easily cause envy and this is recorded in our Tanach (Bible) all the way from Laban’s sons in Genesis to Joseph’s multicolored coat that was made from Jacob Sheep wool. Rabbi Vaknin recommended that my wife and I be the shepherds that escort them back to Israel.”