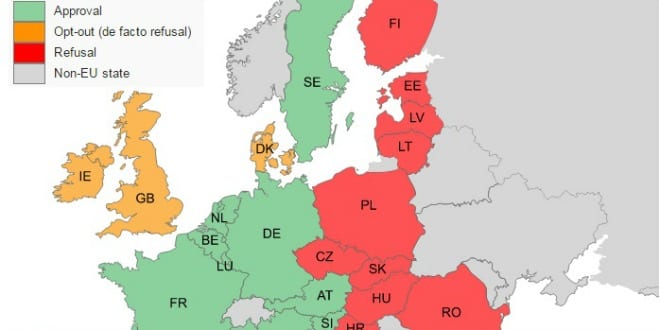 Der Spiegel on Sunday published a sober and alarming report on the refugee situation in Germany, which shows Germany is in the midst of a spiraling crisis, with a reported 409,000 new arrivals between Sept. 5 and Oct. 15 this year, more than ever before in a comparable time period. Entire cities and towns in Germany have been completely transformed with ever increasing hordes camping on their main streets. In Hesepe, a village of 2,500 in the state of Lower Saxony, Kathrin and Ralf Meyer have told Spiegel reporters, “It’s gotten a bit too much for us, too much noise, too many refugees, too much garbage.” The Meyers are moving out, sick of asylum-seekers sitting on their garden wall or rummaging through their garbage cans. “You do feel sorry for them,” says Ralf, “but there are just too many of them here now.”

Six weeks after Chancellor Angela Merkel’s historic decision to open Germany’s borders, Germany lacks a plan to make Merkel’s generous gesture work without causing the country to collapse under the weight of too many needy outsiders. There aren’t enough buildings that are up to code, there aren’t enough personnel with the needed backgrounds, because too few students have pursued degrees in the needed specialties. Last week, Interior Minister Thomas de Maizière confided in his Luxembourg counterpart, telling him that Merkel did not have a plan, only “cold feet.”

Tens of thousands of asylum-seekers haven’t been registered, so no one knows how many of them have entered the country. And they don’t wish to go where they’re told, to be evenly distributed around the country, they want to go to where they have relatives and friends. Last week, according to Spiegel, a train from Bavaria carrying 450 refugees arrived in the town of Uelzen in Lower Saxony, and some 300 of them refused to get on the buses that were waiting to take them to their new homes. Now soldiers are stationed in Uelzen, to gently but firmly guide refugees to the buses.

The weather is a major enemy these days. Temperatures are falling, the first frosts appear, snow has been spotted, and before you know it Germany will be crowded with homeless crowds in its frozen streets, huddled around fire barrels and dying of hunger and disease. Some mayors have cancelled the contracts of tenants in publicly owned apartments in order to house refugees—creating German homelessness to prevent refugee suffering. That point has not escaped the attention of anti-refugee Germans. Henriette Reker, a candidate for senior mayor of the city of Cologne, was stabbed in the neck in an open air market, and the arrested suspect told police he was acting out of ethnic intolerance. He disapproved of the candidate’s liberal policies on refugees.

Many conservative lawmakers would like to see the reintroduction of border controls and want most asylum seekers to be blocked at the border. They want the state to demonstrate that it hasn’t completely lost control of who gets to enter. Merkel believes that this is the wrong approach. Her party, the CDU, has presented itself solidly behind the chancellor. But criticism is growing. Merkel knows that the pressure will continue to mount. Within her own party, the Christian Democrats, many consider it a given that she will have to change her policy.

According to Spiegel, Merkel’s last hope is Turkish president Recep Tayyip Erdogan, whom the chancellor is visiting in Ankara this weekend, hoping to buy him off with huge sums of money, so he would keep the sea of humanity on his shores.