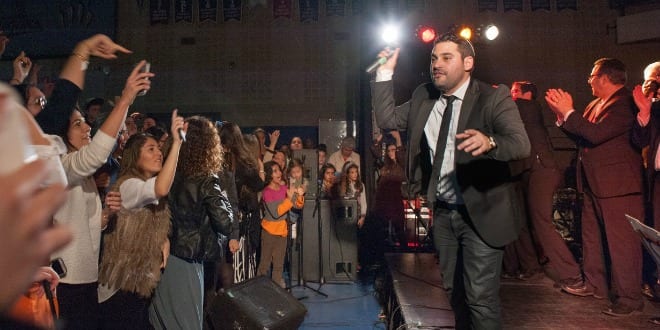 From Oct. 23-24, Jews of all ages, levels of religious observance, and geographic locations will come together to celebrate the Jewish people’s oldest friend: Shabbat.

“Shabbos has been with us since the formation of our people and with every step of our Jewish journey, Shabbos has accompanied us. The Shabbos Project is like a reunion, a reconnection with our oldest friend,” says Rabbi Dr. Warren Goldstein, chief rabbi of South Africa and founder of The Shabbat Project (also known as The Shabbos Project).

The Shabbat Project started as a local South African event in 2013. Goldstein proposed the idea of hosting a communal Shabbat experience when speaking at a conference and received an outpouring of support. He says he expected 1,000 or 2,000 South Africans to join him for Friday night dinner and make a commitment to try to keep the 25-hour day of rest. In the end, he had the majority of South Africa’s Jews take part. After the event, when Goldstein put up a video and participants shared their personal experiences through social media, thousands of emails started pouring in, asking how the South African event could be emulated in local communities. In 2014, The Shabbat Project took place in 465 cities in 65 countries. This year, there are more than 5,000 partner groups working in more than 500 cities.

“I think there is a thirst for Jewish unity,” Goldstein tells JNS.org. “People are thirsting for Jews to rally not because we are forced to by our enemies, but because it is something that we want, that we are doing around the positive values of who we are.”

Goldstein also believes people crave a day to disconnect from the modern, fragmented, distracted, demanding world, and to reconnect on a spiritual level with God, community, and family.

Still, Goldstein says that “no one dreamed” The Shabbat Project could reach the size it is today or bring joy to so many individuals.

In the small city of Nijmegen in the Netherlands, the local synagogue has only 80 family units, and among them a handful observe Shabbat according to halacha (Jewish law). Last year, Frieda Rinia helped a group of three women—all single, by death or divorce—observe Shabbat.

“It was very exciting,” Rinia writes in a letter to The Shabbat Project. “The knowledge that all around the world Jewish people at the same time are keeping an entire Shabbat.…We feel it—all together.” Daniela Cherem of Mexico City describes how she lives in an apartment building with many Jewish residents. She and her roommates decided to host a Shabbat-morning Kiddush last year for 300 people. So many more people came that they had to turn people away. Cherem also invited a family over for Shabbat dinner. One of the women who came told her that she had lit the Shabbat candles that night—something she rarely, if ever, did. And she didn’t turn on the TV.

Last year, Shabbat Project events took place in hidden Jewish enclaves, including in Angola, Nigeria, Cambodia, Jamaica, Fiji, Finland, Zambia, the Maldives, and Ecuador. In Delémont, Switzerland, the last time the old synagogue was used was in 1971. It was reopened in 2014 to host students from across Switzerland who had gathered for a Shabbat Project weekend.

The Argentine Jewish community pulled 13,000 people together for a communal havdalah ceremony that was broadcast on national TV. In Santiago, Chile, more than 2,500 women turned out for a communal challah-baking event.

In Miami, young Jewish girls studying at a Christian school joined 5,000 others to bake challah.

“The day of the challah bake, we received a phone call from the Palmer Trinity School, a private Episcopal school in Miami, asking if they could reserve a table at the event. The Shabbat Project liaison…gingerly told them the evening would be focused on teaching Jewish religious values,” recalls Alyssa Baumgarten. “The school said they understood that, but they saw our advertisement for the event in the newspaper and they felt that they wanted to send their Jewish students….Ten Jewish girls who attend an Episcopal religious school came to the Miami challah bake. This was likely the only exposure these girls have ever had with anything Jewish.”

At one point, more than 7,895 users tried to sign up for The Shabbat Project on the initiative’s website at the same time—crashing the server.

This year, in France, the Jewish community is bringing a baker from a famous French bakery to run the challah bake, says Rabbi Moche Lewin, who spearheads the project. France has been among the European Jewish communities struck with growing anti-Semitism and Islamist terrorism. Lewin says that given recent events, The Shabbat Project is more important than ever.

“Sometimes, I think people feel stronger and more proud to be Jewish because of the terror,” says Lewin. “After the most recent attack in Paris [on a kosher supermarket in January], the people wanted to come together to make a special Shabbos. But this was for sad reasons.…It is important to make that same Shabbat for a good reason, not a tragedy. That is The Shabbat Project.”

In Australia, Talya Rotman is directing efforts to bring youths together through the Shoelace Project, originally started by a 17-year-old student in South Africa. Students receive a single luminous blue shoelace that they can wear to school. It allows the children to own a unique badge that shows they are part of a global movement.

Rotman says the local Jewish community is also focusing this year on the “Pull Up a Chair” campaign, encouraging Jews to host meals in their homes. The community has created 1,000 Shabbat Project tool kits, which include bentcher (birkat hamazon or grace after meals) cards, candles, grape juice, and anything else one might need to complete the mitzvah of Shabbat.

“For us, the highlight is that this year more than 100 Jewish organizations are involved in some way—hosting a cocktail party and an educational session to teach about the mitzvah of Shabbat,” says Rotman. “That so many organizations are getting together, that is just really amazing to see.”

The Shabbat Project’s new inclusion of Israeli cities is a highlight this year, according to Rabbi Goldstein. In a country with deep secular-religious divides, Jewish communities are coming together with the backing of mayors and municipalities throughout Israel as well as individual lay leaders. Hatzofim (secular) and Bnei Akiva (Orthodox)—the country’s two biggest youth movements—are sending tens of thousands of their members into the field to arrange Shabbat dinners and activities and to hold joint Kabbalat Shabbat (welcoming in Shabbat) services.

Tel Aviv will host “back to basics” Friday night picnics on Rothschild Boulevard and Kikar Hamedina. In Safed, where the popular Shabbat songs Shalom Aleichem and Lecha Dodi were written, the mayor will host a citywide unity Kabbalat Shabbat service.

Ilan Ivgi of Ashkelon says he sees The Shabbat Project as a chance to connect Ashkelon to the rest of global Jewry. Having lived in Peru, Ivgi says he noticed in the South American nation how synagogue was not just a place for religiously observant people, but an opportunity for community-building. He wants that for his current Israeli hometown, too.

“We are lucky to have Israel, but people need more than that,” he says.

Working with the mayor and five of the major community centers, Ivgi has helped arrange communal Shabbat dinners, an evening of Shabbat karaoke, and the opportunity for a community-wide prayer service.

“Our strength is in unity. There is nothing better to connect the Jewish people than something from our Torah,” Ivgi says.

Rabbi Goldstein believes the secret to the success of The Shabbat Project is the fact that individuals, such as Ivgi, are empowered to spearhead their own efforts and take ownership of what it means to be a Jew.

“There is no bureaucratic structure or hierarchy. People take it on themselves and exercise personal leadership,” he says.

The project’s website (www.theshabbosproject.org) offers toolkits and customizable marketing materials for support, and it encourages individual communities to reference the work they are doing. This way, they can share their best ideas with partner communities around the world.

“A flash mob has this element of being viral and natural and community and socially driven,” says Goldstein. “This is a holy flash mob.”