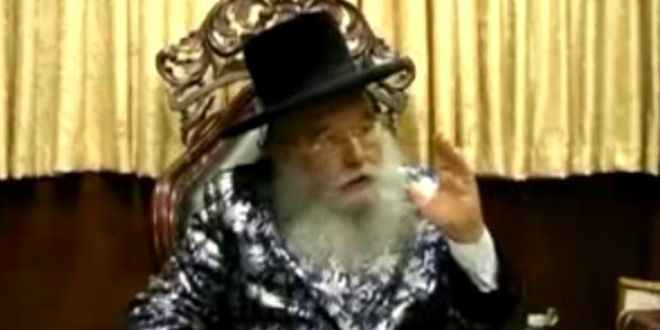 An important Hassidic rabbinical leader recently offered a surprising Biblical interpretation of the War of Gog and Magog.

At the festive meal that concluded the holiday of Simchat Torah earlier this week, Rabbi Sholom Berger, also know as the Mishkolitz Rebbe, spoke about the imminent arrival of the Messiah and the War of Gog and Magog. He revealed a surprising interpretation that challenges the usual understanding of where the war will take place, offering reassuring advice as to what we need to do in these darkened times.

In his talk, reported by the Hebrew language website Sod 1820, the Mishkolitz Rebbe explained that, contrary to the Biblical sources which describe the War of Gog and Magog as taking place in Israel, the war has already begun and is taking place in Syria.

“Whoever even tries to seek the truth about what is going on around us understands that God is bringing us towards the revelation of the Kingdom of the Messiah and towards Redemption, and the redeeming of our souls,” he said. “This winter, there will continue to be upheavals in the world and everything will be for the good of Israel!”

The Mishkolitz Rebbe said that the war in Syria is a form of God’s mercy on the land of Israel and the nation. “My heart tells me that God has mercy on Israel. Despite what the prophets prophesized, that the War of Gog and Magog needs to be inside Jerusalem, God is sweetening the judgment and is making this war happen in Syria,” he stated.

“The proof of this, as it is brought by the sages of blessed memory (Sifri Numbers Chapter 1), ‘In the future, the gates of Jerusalem will reach Damascus.’ In that case, instead of the war being inside Jerusalem, and the people of Israel suffering as a result, God has extended Jerusalem to include Damascus in order that the enormous war will be there, like we are seeing now.” the Mishkolitz Rebbe explained.

“Russia has entered into Syria with great strength and even China has announced that they will be doing so also. This will apparently lead to the Third World War with the United States and its allies and to horrifying spilling of blood until they will all be destroyed.”

The rabbi called on Jews around the world to unite and take heed of God’s commandments. “There remains for us to be united among ourselves and to be wary of internal disputes and to be careful not to speak slander about each other because the Messiah is already here and he hears everything.”

“It is also important for us to learn Torah with great enthusiasm, as it is written by the Or HaChayim in the portion of Titsaveh, ‘Because Moses does not desire redemption with those who neglect Torah study’”.

“And soon we will merit seeing miracles and wonders this year when the Messiah is revealed through righteousness and loving-kindness. Amen!”

The Mishkolitz Rebbe has made headlines before with his revelations. At the end of 2011, he announced that no military strike on Iran was necessary since then Iranian president, Mahmoud Ahmadinejad, who was threatening Israel with nuclear destruction, would soon fall from power. The Rebbe compared Ahmadinejad to the Biblical villain of Haman, whose fall from power was swift and dramatic, as record in the book of Esther.