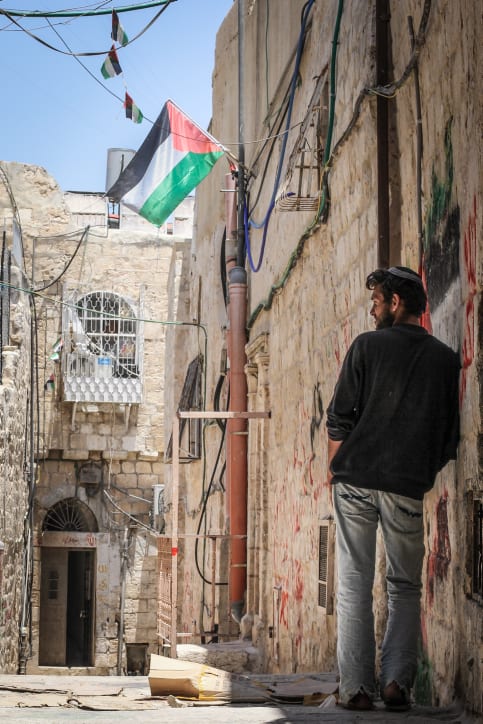 Israeli Aharon Bennett was murdered only a few steps from the gate of the Wittenberg compound in the Muslim Quarter of the Old City of Jerusalem on Saturday, and Rabbi Nehemiah Lavi, a resident of the Jewish enclave who heard the screams and came downstairs to help was murdered, too. On Wednesday morning there was another murderous attack nearby — an Arab female stabbed a 36-year-old Jewish man at the Lions’ Gate, but he managed to cock his gun and shoot her, possibly fatally.

Walla’s Moshe Steinmetz visited the Jewish compound in the Muslim Quarter on Tuesday, and found a group of some 20 youths sitting outside the safety of the gate, right on HaGai Street, the scene of Saturday’s murders, playing a guitar with a mobile karaoke amplifier.

Some 70 Jewish families live outside the Jewish Quarter in the Old City, mostly in the Muslim quarter. Recently, this Jewish settlement has begun to spread into the Christian Quarter as well. “The windows up here, this is my home,” pointed Rachel Zuberi, 43, a 23-year resident of the compound and the mother of seven. “Here is the door of the Lavi family,” she continued sadly. On Saturday, she heard the murder stabbing scene under her window. “I was here during those rough moments with Neta, when her husband passed away. I discovered what a neighbor she is, and near what great people I live. I draw strength from that.”

With a population of 22,000 in an area of 76 acres, the Muslim Quarter is the largest of the four quarters of the old, walled city of Jerusalem, located in its northeastern part. It extends from the Lions’ Gate in the east, along the northern wall of the Temple Mount in the south, to the Damascus Gate—Western Wall route in the west. The Via Dolorosa starts in the Muslim quarter. The Muslim Quarter hosted a mixed population of Jews, Muslims and Christians until the 1929 Arab riots. Jewish landmarks in the Muslim Quarter include the Kotel Katan or Little Western Wall, and the Western Wall Tunnels, which run below the neighborhood along the Western Wall. There are many Roman and Crusader remains in the quarter.

Despite the difficult security situation, which has become increasingly more dangerous in recent weeks, Zuberi feels that she is living “in the best place there is.” Although she lives in the midst of many Arabs, she is certain: “We’re very happy here. It’s uplifting, magical and addictive. You cannot leave here. This is the place where our forefathers walked, the closest place to the Temple. It is a spiritual connection.”

She notes that where Muslims now reside used to be a Jewish neighborhood, and what she and her friends are trying to do is to “restore the old glory.” She says: “You walk down the street here and see homes whose Jewish mezuzas-doorposts were torn off. We are not invaders here, we’re not a delusional bunch choosing to locate in a dangerous place.”

The apartments in the compound, as well as throughout the quarter, belong to the “Ateret Cohanim” yeshiva, which and leases them to Jewish tenants, some for as little as $250 a month—but the demand is very great and currently there are no vacancies. “There are dozens of families who want to get in right away,” Rabbi Yossi Cohen, one of the first settlers in the Muslim Quarter 36 years ago, told Walla.

Birkhi Zarbib, 23, has lived in the compound with her brand-new husband since their wedding eight months ago. From her apartment window she sees the Temple Mount. She is determined: “We believe we have to settle the Land of Israel and to show Jewish presence. Of course we shouldn’t do it with pressure or nerves, but quietly and calmly, but we need to show that it all belongs to us. Since Rosh Hashanah, the Arabs have begun to rebel, which is why we’re here.” When asked if recent events have increased her fears, she replied that “during hot situations we are closely accompanied by police and soldiers 24 hours a day. It is a privilege to live here, and there is no fear. It is important for us that everyone will come and see that we’re having a normal life here.”