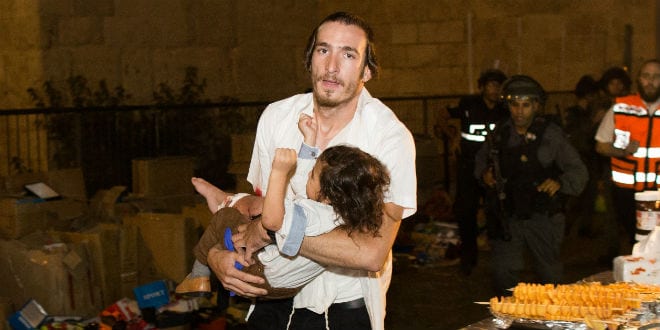 Israel is in the midst of a wave of violence, centered around the Temple Mount, spreading to the entire country. In a disturbing yet necessary measure, the police have restricted Jews and Arabs from entering the Old City of Jerusalem. The Palestinian Authority has called this a “policy of escalation”.

A short period of calm on the Temple Mount after the Morabiton and Morabitat groups were outlawed exploded at the beginning of the Jewish holiday period, with daily clashes between Arabs and Israeli police. The violence has persisted and spread. Below is a partial list of the incidents of violence against Jews that have been reported in the Israeli media in the last four days.

Political responses to the rise in violence have clearly been ineffective, and some are aimed at exacerbating the problem. European Union (EU) High Representative for Foreign Affairs Federica Mogherini reacted to the deadly attack last week by calling for a return to negotiations leading to a two-state solution.

Two weeks ago, Israeli Prime Minister Benjamin Netanyahu and his security cabinet unanimously agreed to back stricter legislation to cope with the violence.

Palestinian Authority (PA) President Mahmoud Abbas, head of Fatah which claimed credit for last week’s deadly attack has been criticized for remaining silent in the face of the rising violence. In his speech in front of the UN General Assmbly last week, he stated that due to Israeli non-compliance, the PA is no longer bound by the Oslo Accords.

Deputy Foreign Minister Tzipi Hotovely, in an interview with Arutz Sheva, stated that Abbas’ speech was “incitement” and accused the PA of “distancing peace”.

“I think it’s clear that the Palestinians are choosing time after time to distance peace, and not doing anything to show the world that they intend to do differently than to support terrorism and anti-Semitism,” said Hotovely.

Haneen Zouabi, Israeli Knesset Member for the Joint Arab List spoke with the Israeli magazine, Makor Rishon, in an article published on Friday, saying that Jews should be banned from the Temple Mount.

“The name is al-Aqsa, not the Temple Mount, and there is nothing there for Jews.”

When asked about the Jewish Temples, she responded, “The existence of the temple is not verified scientifically.” She referred to Israeli security measures in Jerusalem as “a declaration of war”.

Her sentiments are supported by the other members of the Joint Arab list. Arab MKs Jamal Zahalka, Massoud Ghanayem and Abdel Hakim Hajj arrived at the Temple Mount last week and made speeches that were followed by riots and intense confrontations with the police. MK Taleb Abu Arar spent Sunday morning at the Temple Mount, cursing Jews who passed by, screaming that they had no right to approach the area.

“In a week where world leaders gather at the UN  to discuss issues of peace and security, they should all take the opportunity to publicly condemn the attack and the incitement against Israel by the Palestinian Authority, which has created a fertile ground for the recent spate of violence in the West Bank and in Jerusalem.”

Mahmoud al-Zahar,a high-ranking official in Hamas, made a statement on the organization’s website, calling for “West Bank and Jerusalem residents to take up arms.”