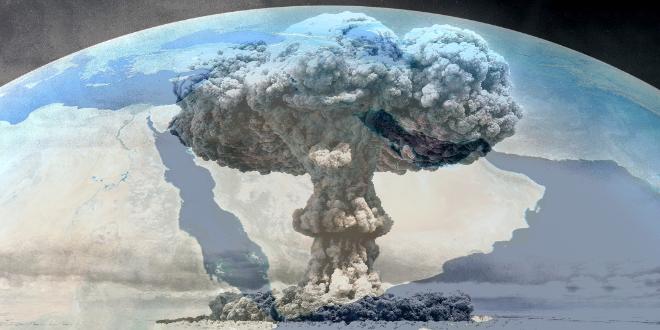 With Iran and ISIS battling for nuclear weapons, Zechariah 14:1-21, the prophetic passage read in synagogues across the world on the first day of Sukkot, brings nuclear war into stark relief.

Although German journalist Jürgen Todenhöfer spent 10 days with ISIS in December 2014 and wrote a book about it, his findings have been the subject of increasing media coverage in recent weeks. The title of the book, written in German, translates as “Inside IS – Ten Days in the Islamic State”. In the book, Todenhöfer writes about the keenness of ISIS to acquire nuclear power. He called the renegade army a “nuclear tsunami preparing the largest religious cleansing in history.”

How many people are in the crosshairs of the ISIS nuclear ambition? Todenhöfer claims that “the terrorists plan on killing several hundred million people.” Only a nuclear war can cause death on that scale.

Iran’s nuclear ambitions, and its intentions to destroy the US and Israel, are well known. Iran’s Supreme Leader Ayatollah Ali Khamenei recently vowed that Israel will cease to exist in 25 years and that the US will be destroyed in 10 minutes if they threaten Iran.

Indeed, it is only in the nuclear era that we can truly understand the prophecy from Zechariah which describes a gruesome death with these words, “his flesh will waste away while he still stands on his feet; his eyes will waste away in their sockets, and his tongue shall waste away in his mouth.” (Zechariah 14:12)

Where else in Jewish tradition is there a foretelling of nuclear war and the death of millions?

Rabbi Yechezkel Abramsky, a 20th century Torah scholar who served as the head of the Jewish court in London as well as the head of a prominent yeshiva (school for advanced Jewish studies) in Israel prior to his death in 1976, has been widely quoted as saying, “We have a tradition from the Vilna Gaon that the war of Gog and Magog will last 12 minutes. A third of the world will die, a third will suffer from plague and a third will survive.”

Rabbi Elijah ben Shlomo Zalman, better known as the Vilna Gaon, lived in the 18th century. He was among the greatest Torah scholars in the history of Judaism and is one of the most important Jewish leaders of the past 1,000 years. The Vilna Gaon’s prediction of a war lasting 12 minutes is all the more remarkable considering that he died near 150 years before nuclear weapons were invented.

“Nothing will help Iran. They pretend to love peace, but they want to take weapons from Russia and financial support from the United States. The US needs to urgently wake up; it made a mistake with Iran and only got trouble out of it. Iran can’t hurt Israel. They know that G-d is protecting the Jews in Israel, and if they do even the smallest thing against Israel, G-d will turn all of the factories in Iran to a giant torch and Iran will be destroyed.”

“We will repeat again, Israel is protected; a cloud of fire protects the borders of Israel.”