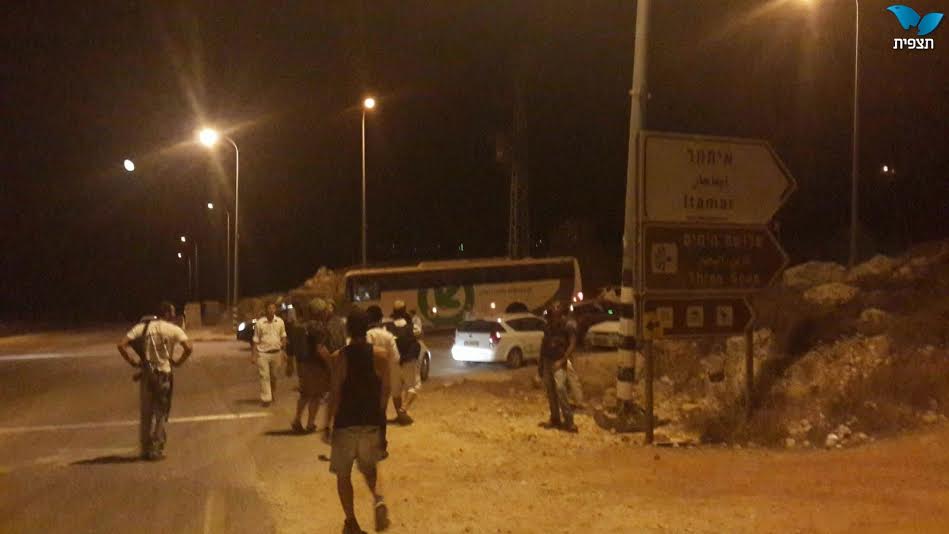 A horrific terror attack has claimed the lives of an Israeli mother and father Thursday evening after their car came under fire by Palestinian terrorists.

The couple, identified as Eitam and Naama Henkin, lived in Neria, north of Ramallah. They leave behind four orphaned children – aged 4 months, 4 ,7 and 9 years – who were in the vehicle at the time of the attack.

Shortly before 9 pm, the Henkin’s were traveling between the Itamar and Elon Moreh communities, located near the Palestinian village of Beit Furik. As the car slowed before making a turn, a Palestinian vehicle accelerated towards the Henkin’s, opening fire on the family with a rifle and handgun.

Eitam and Naama were struck in their upper bodies multiple times. Paramedics pronounced the couple deal at the scene. The children were uninjured in the attack.

According to investigators, Naama was killed immediately. Eitam managed to step out of the vehicle, open the back door of the car, and ordered his children to flee the scene of the attack. He then collapsed on the road and died.

BREAKING PHOTO: Emergency units on scene after Israeli couple died after being shot by Arab terrorist near Itamar. pic.twitter.com/cq1YBspxeF

Investigators added that the terrorists stopped their vehicle alongside the Henkin’s to confirm the attack. One terrorist stepped out, walked over to the car and confirmed that both parents were dead. He then returned to the vehicle, which was seen fleeing towards a nearby Palestinian village.

Security officials have launched a massive manhunt in search of the terrorists.

The Hamas terror group praised the “heroic attack,” calling for “more high-quality” attacks against Israelis. “The Zionists will pay the price for Netanyahu’s criminal policy in every place,” the group said in a statement.

“This is a difficult day for the State of Israel. We witnessed an especially cruel and disgusting murder during which a couple was killed. Parents were killed and their children left orphans. Our heart goes out to the children,” Netanyahu told reporters from his Manhattan hotel, following his speech to the UN General Assembly.

“The murderers knew they were killed a father and a mother because the children were there,” he stated. “It has been proven again that wild Palestinian incitement leads to acts of terrorism and murder such as we have seen this evening.”

Israeli Defense Minister Moshe Ya’alon vowed to “put our hands” on the terrorists behind the deadly attack. “This evening lethal attack is the logical continuation of the incitement against the State of Israel and its citizens,” he said in a statement shortly after the attack.

“The war on terror demands of us determination, an iron fist and patience. We are fighting a bloodthirsty enemy, and unfortunately we are suffering losses along the way. As we speak, the IDF and Shin Bet security service are searching for the murderers,” Ya’alon explained. “We will track them down, and we will not rest until we put our hands on the murderers and those who sent them.”

The US State Department issued its own condemnation of Thursday’s attack. “The United States strongly condemns the terrorist attack that took place late Thursday evening in the West Bank,” said spokesman John Kirby.

“We urge all sides to maintain calm, avoid escalating tensions in the wake of this tragedy, and work together to bring the perpetrators to justice.”

Family and friends of the Henkin’s have been left in shock. “They were a dream couple, who in life and death were inseparable” a neighbor, identified as Shlomit, told Ynet. “Everyone knew that they went everywhere together. They invested a lot in their relationship, in their family, their children.”

“They were something special, good people, very humble,” she added.

Eitam is the son of Rabbi Yehuda and Chana Henkin, who moved to Israel from the US in the 1970s. His mother, Chana, runs the world famous Nishmat Institute, a learning institution that was the first to teach women Jewish law and Talmud. Rabbi Henkin is a well-known and respected Torah scholar and author of various response.

Eitam and Naama Henkin will be laid to rest Friday morning at 11 am at the Har Hamenuchot cemetery in Jerusalem.