Photo Essay: A Retropective of the Priestly Blessing at the Western Wall on Sukkot 2015

Home » Photo Essay: A Retropective of the Priestly Blessing at the Western Wall on Sukkot 2015 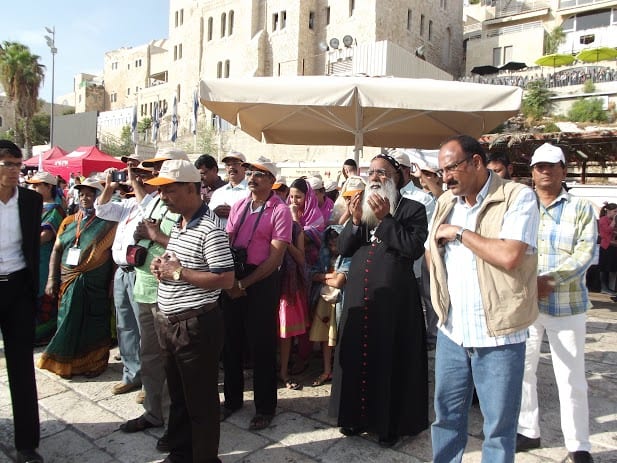 The mass blessing by the kohanim, who are the descendants of Aaron, the first High Priest, takes place twice a year, on Sukkot and Passover. The priestly benediction is found in Chapter 6 of the book of Numbers, where God instructs Moses to tell Aaron and his sons how to bless the Israelites.

At the ceremony were Israel’s chief rabbis, Yitzhak Yosef and David Lau, and Rabbi Shmuel Rabinovitch, the rabbi of the Western Wall. An Indian Bishop was also in attendance, seen below.

At morning prayers, men donned their prayer shawls (tallit) and held the four species which Jews are commanded to take up on Sukkot: a citron (etrog), a palm branch (lulav), boughs with leaves from a myrtle tree (hadasim), and branches with leaves from a willow tree (aravot).

A Torah scroll in a beautiful decorative case for the Torah reading of the morning service.

A man takes the four species, makes the required blessing and shakes them in the six directions (east, south, west, north, up and down).

A man in prayer holds an exceptionally large etrog!

The Torah scroll opened for reading.

The bridge to the right of the Western Wall plaza leads up to the Temple Mount, where Jews would ascend in Biblical times during the three festivals to offer prayers and sacrifices at the Holy Temple. Today, Jews still make pilgrimage to Jerusalem during the festivals, even though the Temple no longer stands.

During the prayer, kohanim must cover their heads with their prayer shawls and hold up their hands towards the congregation of Israelites to make the blessing upon them.