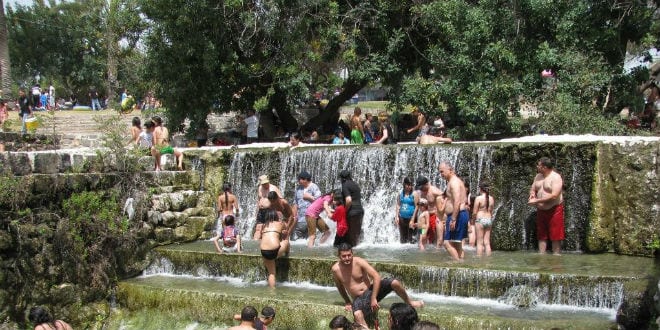 Over 100,000 Israelis took to the national parks and nature reserves on Monday, the first day of Sukkot, according to the Israel Nature and Parks Authority (INPA). Israelis often celebrate holidays such as Sukkot and Pesach by hiking, camping and picnicking in and around Israel’s green spaces.

Another water attraction, the Ein Gedi streams of Arugot and David, were popular as well. A horse show at the Caesarea hippodrome brought in over 8,000 people in attendance.

According to the KKL report, other popular sites throughout the north of the country included the Biriya Forest campsites, Mordot Carmel-Nazareth, Goren Park, Adamit Park, Ahihud Forest and Agamon Hahula. In the Central region of the country, the most popular sites were Ben Shemen Forest, Ayalon Park, British Park, Hulda Forest and the forests along the hills of Jerusalem. Meanwhile the in the South, visitors crowded into Golda Park, Yeruham Park and Dimona Park.

Picnic sites and cycling paths throughout the country have also been busy, with KKL reporting that most of the picnic sites that the organization oversees were full.

During the week, the numbers are expected to rise, as Orthodox Jews, who for the most part do not head out to campsites on the first day of the holiday, are expected to join their secular brethren during the intermediate days of the festival. Foresters and park rangers stressed the importance of observing rules regarding cleanup and fire safety, as in years past several large forest fires begun by careless campers have destroyed thousands of trees.