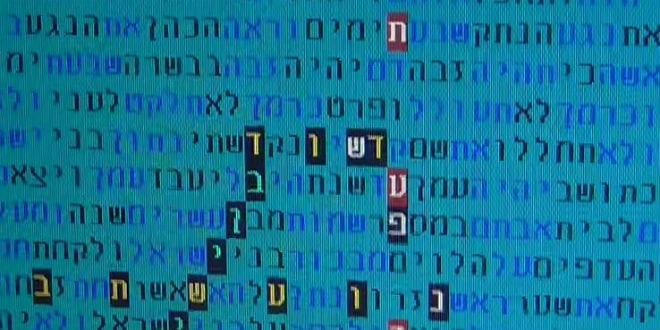 Biblical authorities have expressed their belief that we are now in the middle of the Messianic era. A recent review of Bible Codes found in Leviticus 23-25 points to the arrival of the Messiah during late September or early October of this year.

Rabbi Mattityahu Glazerson, international Bible Codes authority, reveals multiple references to the Messiah and King David, from whom the Messiah is descended, in a new video.

The first code that Glazerson points out is the phrase Moshiach yavo (Messiah will come). He goes on to point out the word b’Sukkot  (on Sukkot), the Jewish holiday otherwise known as the Feast of Tabernacles. A third code are the Hebrew letters tav, shin, ayin and vav (תשעו) whose numerical values add up to 776. This is a clear reference to the Hebrew year 5776, which began on sundown on Sunday, September 13.

In other columns in the table, Glazerson points out that the word David and also the words ben Yishai (son of Jesse, a reference to David) are found parallel to the code Moshiach yavo  (Messiah will come). Glazerson reminds his viewers that codes which appear parallel in a table are thought to have a particularly strong relationship.

The table from which these Bible Codes are derived comes from the Book of Leviticus, chapters 23-25. In a manner that’s unusual in his Bible Codes videos, Glazerson reads and translates all or part of multiple verses from these chapters. In this way, he establishes that the Codes are relevant to the subject of the Biblical text itself, which mentions shmittah, yovel (Jubilee) and the holiday of Sukkot.

The specific verses he quotes are:

“But in the seventh year, the land shall have a complete rest a Sabbath to the Lord.” (Leviticus 25:4)

“When you come to the land that I am giving you, the land shall rest a Sabbath to the Lord.” (Leviticus 25:2)

“You shall perform My statutes, keep My ordinances and perform them then you will live on the land securely.” (Leviticus 25:18)

Another fascinating detail in the Hebrew for this verse is that yigalaynu is translated in this context as “redeem him”. However, in another context, it’s possible to translate yigalaynu as “redeem us”. So the verse “Or his uncle or his cousin shall redeem him” could be understood to mean “David or the son of David will redeem us.”

Toward the end of the video, Glazerson points out two surprising codes. One is the Hebrew word mish’ala (wish, desire, request) and the other is tikvah m’el (hope from God). Glazerson says, “It is really a request, hope from God, that it will happen… [God willing], we hope soon to see Moshiach (Messiah) coming and redeeming us for all these troubles that we have today.”

When asked to reflect about all these signs of the Messiah’s imminent arrival, Glazerson told Breaking Israel News, “The fact that Rabbi Kanievsky speaks so much about it makes it interesting. [Before recently] he would not speak clearly about Mashiach (Messiah).”