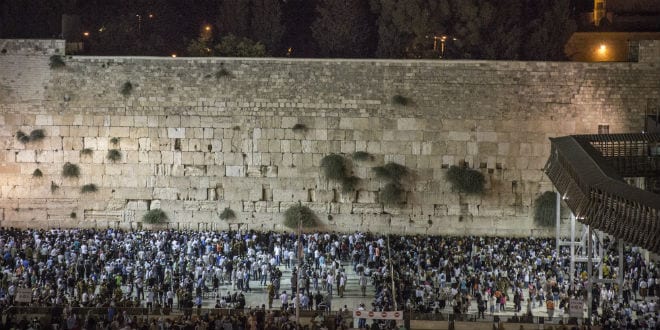 This upcoming Wednesday, September 30, thousands of people will descend on the Western Wall Plaza to take part in a rare Biblical commandment that occurs once every seven years.

The commandment of Hakhel involves assembling all Jewish men, women, children and non-Jewish residents of Israel to hear the reading of the Torah by the king of Israel after each Shmittah year. The Hakhel gathering took place at the Temple in Jerusalem on the second day of the holiday of Sukkot (Tabernacles), when all of Israel was gathered together in the capital.

The Biblical requirement for perform this commandment is not incumbent upon the Jewish nation today since it is only when all the Jewish people reside in Israel.

Nonetheless, there was a move to revive this unique commandment, at least in a symbolic manner, beginning in the early 1900s with Rabbi Elijah David Rabinowitz-Teomim (the father-in-law of Rabbi Kook), and then Chief Rabbi of Jerusalem, Rabbi Shmuel Salant.

In 1945, the year after the shmittah, an official Hakhel ceremony was held for the first time in thousands of year. Since then, similar ceremonies have occurred every seven years since. The ceremony will be held this year at the Western Wall, with the chief rabbis of Israel, ministers and politicians in attendance.

Aaron Domba, an organizer behind the last three Hakhel events, spoke with Breaking Israel News about his experiences with what he described as an awe-inspiring endeavor spanning over 20 years. “We all come together as one, equal, like we did at the base of Mount Sinai,” he told Breaking Israel News.

Stressing a unique aspect of Hakhel, Domba points out that women and children, who are usually exempt from positive time-bound commandments, are specifically included, as are Gerim, non-Jewish residents of Israel, to uphold this Biblical commandment.

“The special thing about this mitzvah is that everyone is equal, just like we were together and equal at Mount Sinai,” he explained Breaking Israel News. “The Torah explicitly includes everyone: men, women, children, and gerim. 14 years ago, we held a separate ceremony beforehand in which 6,000 non-Jews gathered at the Southern Wall of the Temple Mount to bless Israel and pray for world peace.”

If you are in Jerusalem on September 30, make sure not to miss the Hakhel ceremony, which is expected to begin at 5 pm local time.