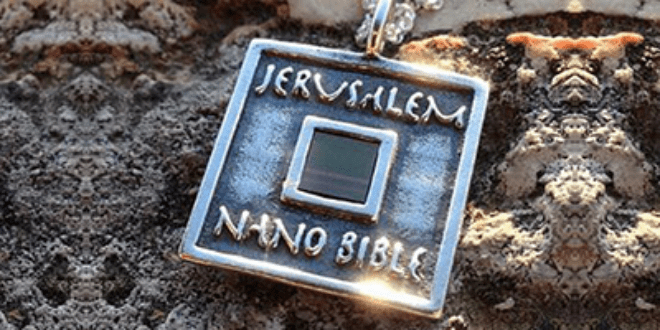 With new innovative technology, Ami Bentov, founder of Jerusalem Nano Bible, has literally reinvented the Bible. Printing the entire manuscript on a 5mm by 5mm surface, the appropriately named Nano Bible is the smallest Bible printed onto a single surface.

Bentov believes that the nano Bibles, which have been in circulation since 2013, are a perfect union of Israel’s spirituality and its reputation as a high-tech haven. He was inspired by the uniqueness that modern-day Israel represents as a place of both technological advancements and a meeting point of faiths.

Israel is a place of contrasting belief systems, where both prayers for peace and the threat of war are almost constant. It was this idea that motivated Bentov to initiate the project and to develop a product which will convey a message of comfort for all faiths.

Ben Eshel, head of sales and marketing for Jerusalem Nano Bible, elaborated to Breaking Israel News on the principles behind the Nano Bible, saying, “This Bible really brings out the connection between the spirituality of Biblical Israel and the technological advancements of the modern State.”

“The idea that I have a Bible on me at all times, all 24 books 24 hours a day, causes me to act in a more appropriate manner,” added Bentov. “It actually makes me feel better, holier. It gives a special feeling of connection for those who believe in the Bible.”

With Israel’s cutting-edge nanotechnology, merging the spirit and scientific prowess of Israel has never been easier. The invention has seemingly paid off for Bentov and the company, as they were recently nominated for the Guinness Book of World Records for creating the world’s smallest Bible.

The Nano Bible can be mounted onto decorative settings and precious metals, making it ideal to fit onto jewelry and keepsakes. Pendants, watches, bracelets and lockets with Nano Bibles are now available in stores.

The Nano Bible has both New and Old Testaments available, and comes in a variety of languages. Each letter of the Bible measures in at 0.18 microns which makes it unreadable to the naked eye. To read this Bible one would need an electron microscope to zoom in to the 1000x level.

Bentov is hopeful that his company’s work can change the way people think about the Bible worldwide. “If the entire world spoke for one minute a day, or a few minutes day, about the Bible, whether they are wearing it, or just have it with them, those few minutes are creating a positive few minutes in their lives that would otherwise not be there,” he said.

Keeping the Bible nearby at all times is a strong reminder of one’s faith, he added. “It gives them a strong feeling of connection, they may even begin to act differently. If each person who wears it speaks about the Bible for just one minute a day, when we collect all those minutes, we have created a lot of positivity. That positivity will cause us all be blessed.”