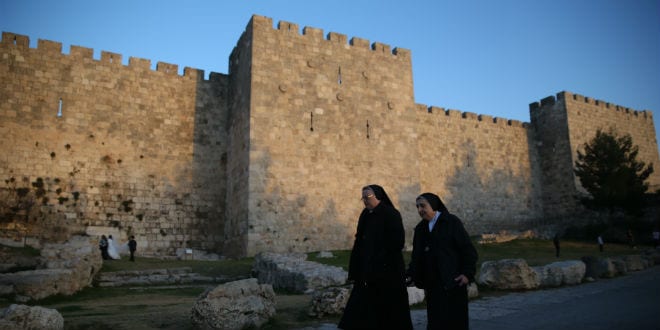 Two days after the Jewish New Year, a diverse group of Christians and Jews from all over the world gathered in Jerusalem to attend the Reconciliation with Israel Conference, which organizers call a “repentance and reconciliation event showing love for all of the lovers of the God of Israel.”

The goals of the event, the brainchild of Kellen Davidson, were to discuss how Israel supporters worldwide can combat anti-Semitism and build stronger relationships between the Jewish people and the nations.

Breaking Israel News visited the conference to meet some of the people enthusiastic about participating in a global effort to unite the nations and fight the anti-Jewish and anti-Israel sentiment rapidly spreading throughout the world.

Peter Towongo, who was born in South Sudan and currently resides in Canada, attended the conference dressed in a colorful traditional garb. He spoke to Breaking Israel News about why he supports Israel. “It says in Scripture that God will bless those that bless thee,” Towongo explained. “We support Israel in prayer and in our presence by visiting here.”

He added that his troubled homeland of South Sudan has enjoyed the support of the State of Israel since gaining independence from neighboring Sudan in 2011. Towongo has arranged to meet with the South Sudanese ambassador to Israel during his trip in addition to touring holy sites in Jerusalem.

Steven Ben-Nun was hard at work manning the video camera for the live-streaming broadcast, but took the time to chat with Breaking Israel News about his journey. Born in the United States, he currently lives in the Czech Republic. Ben-Nun said his passion was to expose what he sees as the underlying anti-Semitism in anti-Israel policy espoused by various Christian groups.

“Esau is alive and well,” Ben-Nun said, referring to the strife between the Biblical brothers Jacob and Esau. “There are some who have a desire to remove Israeli sovereignty from Jerusalem and create an internationalized city,” he lamented.

David Zeit, an American rabbi who moved to Israel many years ago, is well-known as the executive director of United With Israel. His lecture and slide-show presentation focused on anti-Semitism from a different perspective. Rather than focus on Christian teachings, Zeit argued that anti-Semitism has always existed regardless of religious belief.

As a minority, the Jewish community was an easy target for scapegoating and false narratives, Zeit said. He quoted in Hebrew from the Scroll of Esther, which tells the Purim story in which Haman sought to exterminate the Jewish community and offered King Achashverosh monetary compensation for his plan.

Another Israel-based lecturer to address the conference was Yair Davidiy. Dressed in a traditional black hat and black coat, Davidiy advocated unity amongst Jews and Gentiles, stating that some of today’s Christian communities, specifically from Anglo-Saxon origin, might have Hebrew roots.

Other speakers, such as author Avi Lipkin, a Jewish-American living in Israel for decades, discussed Jews and Christians uniting together against a common enemy.

The conference participants hailed from near and far, many with fascinating journeys leading to this place. Victor Schlatter, an American-born church leader who now lives on an island in the South Pacific, is also a former nuclear scientist and the author of such books as “Genetically Modified Prophecies” and “Hatred of the Jew: Why and When Did the Barrage Begin?” He and his wife spent 30 years on the island country of Papua New Guinea and are currently visiting Israel with their granddaughter.

By contrast, Ovadyah Avrahami is a local, an Israeli Jew living in the Samaria region. Born in South Africa, he and his family have been in Israel for decades. His reason for attending the conference was his passion for discovering the identity of the Ten Lost Tribes and returning them or their ancestors to Israel.

These were just some of the many colorful and enthusiastic participants at the conference, who could be found mingling the the lobby holding lively discussions between speakers.

It was evident that not all event participants agreed with each other, but all sat together to express their feelings about the issues affecting the Jewish State. The conference proved that despite growing opposition to Israel in the media, or perhaps in reaction to it, there remains much interest worldwide in supporting Israel, for many diverse reasons.