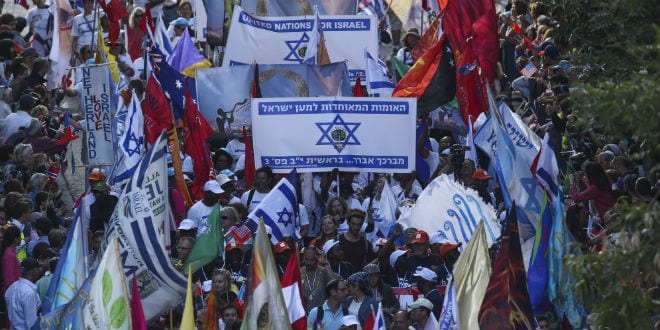 Israel’s Chief Rabbis issued a letter accusing The International Christian Embassy Jerusalem (ICEJ) of seeking to convert Jews at its annual week-long Feast of Tabernacles celebration. The celebration has been hosted by the ICEJ since 1980 when they opened their embassy, and draws thousands of Christians from around the world in support of Israel. The 2014 festival, held in the wake of Operation Protective Edge, attracted 5,000 Christians from 80 different countries.

“It has come to our attention that those engaged in missionary activity under the auspices of the Christian Embassy in Israel are organizing a large conference during the days of Sukkot. Part of this organization’s goals is to convert Jews from the religion of Israel and bring them under the wings of Christianity. Such a thing is severe and contrary to the foundations of our faith, and as such must be condemned and the public must be warned.”

“Even though it is possible that the organizers of this conference are friends of the State of Israel, practically the event expresses a spiritual danger that undermines (Israel’s) Jewish character.”

“The International Christian Embassy Jerusalem was disappointed to learn of the letter issued by the Chief Rabbinate concerning our organization and our annual Feast of Tabernacles celebration. The ICEJ has always respected and upheld the laws of the State of Israel, including those covering missionary activities, and it is regrettable that the Chief Rabbinate acted solely on the misrepresentations of those bearing false witness against us.”

“This will be our 36th annual Feast celebration in Jerusalem and we have always been warmly welcomed in Jerusalem, in keeping with the biblical tradition of the gentiles being welcomed at Succot. It is thus a shame that some are trying to scare the Israeli public against us. We trust that the Chief Rabbinate will reconsider this decision, which could do much harm to the new level of close Jewish-Christian relations that have developed over the past 60 years.”

Michael Oren, former Israeli Ambassador to the United States, wrote on his Facebook page, “I was saddened to read about the public letter of the Chief Rabbis calling for a boycott of the Christian Embassy in Israel. Over the past twenty years, I have worked with the Embassy, which represents many millions of Israel’s Christians supporters worldwide. The Embassy has been outstanding in its advocacy of and love for Israel. I have never once encountered an instance of proselytizing by its staff. Just when Israel is grappling with the threat of economic sanctions and rising anti-Semitism throughout the world, this is the time to embrace–rather than to alienate–Israel’s Christian friends.”

“The ICEJ has been an ardent supporter of Israel and chose to open its embassy in Jerusalem as a reaction to other countries withdrawing their embassies from Israel’s capital. They have always denied any claims of proselytizing, and run many projects benefiting the State of Israel. They have assisted in bringing over 120,000 Jews to Israel, and run a full-care residence for 70 Holocaust survivors in Haifa. During Israel’s war with Gaza last year, they provided portable bomb shelters and other assistance to communities on the border.”

Rabbi David Rosen, the International Director of Inter-religious Affairs of the American Jewish Committee who has served in the past as an adviser to the chief rabbis, spoke to the Jerusalem Post about the statement.

“It seems to me that someone has set up the chief rabbis, for reasons known to these persons, and this is unfortunate because the ICEJ is extremely responsible in not advocating any missionizing or proselytizing activity at all. Instead of censuring this organization, they should be applauding it,” Rosen told The Jerusalem Post.

Last month, the ultra-Orthodox (Haredi) news service, Kikar Shabbat, reported that a group of rabbis had made inquiries into the event after learning that Israel Defense Forces Soldiers would be in attendance.