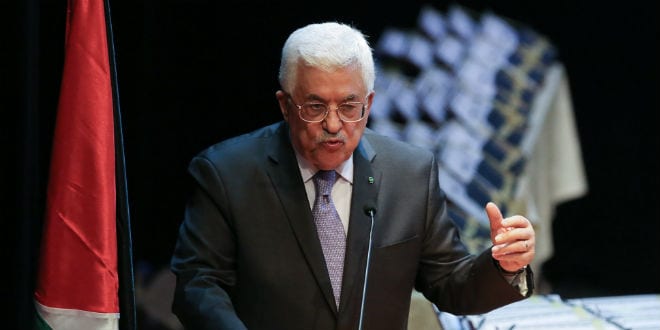 Palestinian Authority President Mahmoud Abbas vowed that he would not allow Israelis to “desecrate” Islamic and Christian holy sites in Jerusalem.

His comments, made Wednesday in an address given in Ramallah, came amid three days of intense clashes between Israeli Police and Palestinian rioters on the Temple Mount, the holiest site in Judaism and third most holy in Islam.

“The Al-Aqsa Mosque is ours. The Church of the Holy Sepulchre is ours as well. They have no right to desecrate the mosque with their filthy feet, we won’t allow them to do that,” Abbas told Palestinian activists.

The PA leader vowed he would do anything to prevent Israel from any plans to “divide” the Temple Mount compound, praising the acts of terrorism and violence directed at Israelis.

“We will not forsake our country and we will keep every inch of our land,” he said. “Every drop of blood spilled in Jerusalem is pure, clean and pure blood spilled for Allah. Every shahid [martyr] will reach paradise, and every injured person will be rewarded by God.”

“There will be no Palestinian state without Jerusalem,” Abbas added, stating, “We are in Jerusalem and we will stay in it to defend our Islamic and Christian holy sites. We’re not going to leave our country.”

Temple Mount Heritage Foundation founder Rabbi Yehudah Glick, a world renowned Temple Mount activist who was the target of a terrorist assassination attempt for his work on the holy site, said Abbas’s latest comments come as no surprise.

“Once again, the world gets a chance to see a small revealing glance at the real attitude of ‘moderate’ Palestinian leadership. Abbas supposedly represents those who we are encouraged to make peace with but basic human values of respect to others are totally foreign to him,” he told Breaking Israel News.

“This approach of hatred and radicalism is what we cope with daily in the most sacred venue in the world, the Temple Mount,” Glick continued. “We demand tolerance and dignity when we are talking about the place God chose to rest His Divine presence.”