Age-Old Biblical Debate Searches to Answer Which Comes First: Messiah or the Temple? 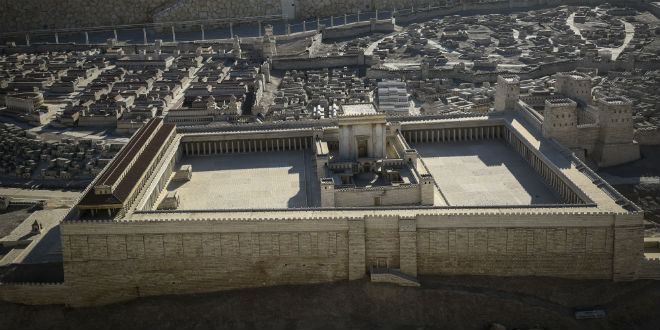 Throughout the ages, Biblical scholars have grappled with a question similar to the age-old riddle about the chicken and egg that has stumped generations of scientists: What will come first – the Messiah or the Third Temple?

The building of the Temple on the Temple Mount in Jerusalem is prophesied in Ezekiel as part of the messianic process:

“In the visions of God He brought me into the land of Israel and set me on a very high mountain, and on it to the south there was a structure like a city.” (Ezekiel 40:2)

However, the messianic process is not always a precisely defined sequence of events. The answer is not simple since there are many differing perspectives. There are two classic opinions surrounding this Biblical debate. Some believe the Third Temple will be built by the Messiah while others say the Temple will miraculously float down from heaven and settle into place after the messianic process is complete. A third, less talked about answer, believes that the Jews should build the Temple now before either the Messiah or heaven intervenes.

The concepts of the Messiah and the Third Temple are inextricably connected throughout history. When, in 132 CE, Shimon Bar Kochba led the Jewish revolt against the Romans, many Jews, most notably the renowned Rabbi Akiva, believed him to be the Messiah. In addition to leading the military campaign, Bar Kochba fostered support by reinstating sacrifices at the site of the Temple and making plans to rebuild it.

Similarly, Bereshit Rabbah, a collection of classic rabbinic interpretations of Genesis, relates that in the era of the sage mentioned in the Talmud, Rabbi Yehoshua ben Chananiah, following the destruction of the First Temple, the Romans granted the Jews permission to rebuild the Temple. The people rushed to begin the preparations for building, but were stopped by the intervention of the Samaritans. It is interesting to note that there was no hesitation; the people did not wait for the Messiah to arrive first. Even in the absence of any messianic personality, the Jews united to build the Temple.

Maimonides, also known as the Rambam, a preeminent Torah scholar of the 12th century, teaches in his book the Mishna Torah (Hilchot Malachim 11:4) that one of the major functions of the Messiah is to reinstate the Temple. Moreover, he states that the construction of the Temple is one of the signs that the messianic process is beginning. However, Maimonides seems to contradict himself when he quotes a verse from the prophecy of Malachi (3:1) in his Letter to Yemen. The verse reads, “For suddenly the master whom you are seeking will come to his sanctuary.” Maimonides explains this verse to mean that the Messiah will arrive only when the Temple is rebuilt.

Rashi, a French rabbinic authority and renowned Bible commentator who lived 100 years before Maimonides, offers a different answer. He explains in the Talmud (Sukka 41a) that the Third Temple has al­ready been constructed by God and exists in the heavenly realms, waiting for the time when it will descend to the earth.

Another scholar, the Midrash Yalkut Shimoni, commenting on Isaiah, writes, “Our rabbis taught: when the Messiah arrives, he will stand on the roof of the Holy Temple, and shout out to Israel: ‘Humble ones! The time of your redemption is at hand!'” This would seem to imply that the Temple already exists when the Messiah arrives, either having descended from heaven or been built by the people of Israel.

Another aspect of the “which comes first” debate is that anticipating the arrival of the Messiah is a commandment incumbent upon Jews at all times. Other than mitzvot (Torah commandments), there is nothing the Jewish nation can do to directly hasten the coming of the Messiah. However, the commandment to build a Temple and perform the Temple service is also incumbent upon Jews at all times, and when given the opportunity, the people of Israel did not hesitate to actively build the Temple. It is only in modern times that the Jews have refrained from this and waited for a messianic imperative.

One of the explanations for this reluctance is uncertainty about the Temple’s precise location. Another problem is that though the Talmud is quite explicit and precise about the dimensions of the Temple, measurements are given in cubits and there is controversy over the precise length of a cubit. For that reason, many Jews prefer to wait for the Messiah to settle that argument before building the Third Temple. A Sanhedrin (High Court) could also settle this uncertainty, but the present Sanhedrin is not universally recognized, preventing this from occurring.

In Kol Hatur, a guidebook for the messianic process in Israel written by Rabbi Hillel Rivlin of Shklov, Rivlin explains that if Israel has sufficient merit, the Messiah will be a miraculous occurrence, coming from heaven instantaneously. If Israel does not have the merit, it will be a long process involving much human labor. The Temple would follow suit; if the Messiah is a miraculous occurrence as a result of our great merit, the Temple will descend from heaven. If we don’t have the merit, it will depend on the human Messiah to build it.