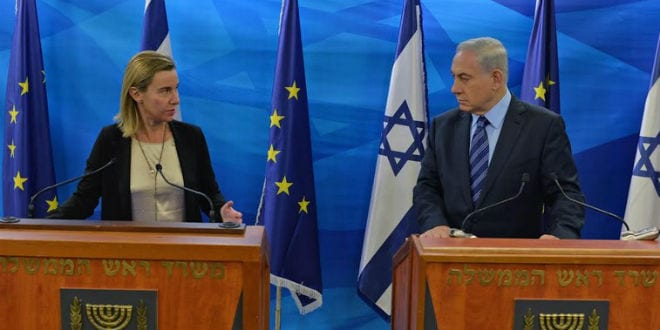 On  Thursday, the European Union overwhelmingly voted for labeling products from Judea and  Samaria as part of the political process moving towards a two-state solution. 525 EU parliamentarians voted in support of labels that would differentiate Judea, Samaria, East Jerusalem, and the Golan, from the rest of Israel, 70 voted against the resolution, and 31 abstained. The guidelines are expected to be presented in detail by the end of the year, though they will not be mandatory for EU members. EU officials claim this is not a boycott and is an extension of existing EU law which considers those regions to be “occupied territory” and not legally part of Israel.

The resolution stated that the parliament, “Welcomes the EU’s commitment – in the spirit of differentiation between Israel and its activities in the occupied Palestinian Territory – to ensuring that all agreements between the EU and Israel must unequivocally and explicitly indicate their inapplicability to the territories occupied by Israel in 1967,  takes note of the letter sent to the VP/HR by 16 EU Foreign Ministers on 13 April 2015, encouraging her to take the lead within the Commission with a view to completing the work on EU-wide guidelines on the labeling of Israeli settlement produce.”

Israeli Prime Minister Benjamin Netanyahu, who is in England at this time, responded angrily to the vote, hinting that it was similar to legal measures enacted in pre-World War Two Germany.

Foreign Ministry spokesman Emmanuel Nahshon responded, ““Under the guise of a technical step, this is an attempt to force a diplomatic solution instead of encouraging the Palestinians to return to the negotiating table. Europe is acting with hypocritical sanctimoniousness toward Israel when it does not consider proposing similar solutions to northern Cyprus or Western Sahara.”

EU sources were careful to avoid the term boycott when referring to the new guidelines, though labeling is clearly a precursor to such a move. Many also feel it puts the default blame on Israel, giving the Palestinian Authority the high ground in any future negotiations.