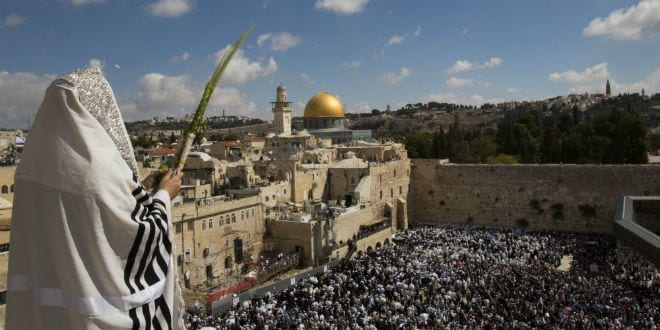 The Jewish people have been without a Temple in Jerusalem for 2,000 years. How is the Bible’s commandment that the Jewish people appear at the site of the Holy Temple three times a year observed today?

According to the Bible, the Jewish people in Israel walked to the Holy Temple three times a year – on the holidays of Passover, Shavuot (Festival of Weeks) and Sukkot (Feast of Tabernacles). Taken together, these three holidays are known in Hebrew as the Shalosh Regalim (three pilgrimages).

Passover is celebrated in late March or April. It is the anniversary of the exodus from Egypt and is also the beginning of the new agricultural season, taking place after the winter rains cease. In Israel, it generally does not rain between the holidays of Passover and Sukkot.

Shavuot falls in late May or June. Jews today celebrate Shavuot as the anniversary of the giving of the Torah, but that is a post-Biblical connection. In the Bible, Shavuot, which falls seven weeks after Passover, is rooted in the agricultural cycle. Farmers would come to the Temple on Shavuot with baskets of their first fruits of the season.

Sukkot falls in late September or October and is the honoring of the food (manna) and protection (Clouds of Glory) that God provided for the Jewish people during the 40 years of wandering in the desert. It is also the final harvest before the winter rains resume in Israel.

During Sukkot in the days of the Holy Temple, water was poured on the altar in an exuberant ceremony known as Simchat Beit Hashoeivah (the Celebration of the Water-Drawing). In the Talmud, Judaism’s most important compendium of rabbinic law and tradition, it is written that “He who has not seen the Water-Drawing Celebration has never seen joy in his life.”

Today, without a Holy Temple, the Jewish people do not offer the korban Pesach, although a symbolic reminder is placed on the Passover table. Jewish farmers do not bring the first of their fruits to Jerusalem on Shavuot, and Simchat Beit Hashoeivah, if it is celebrated at all, is reduced to an evening of music and dance in a local synagogue.

However, Jewish people all over the world still gather for intensive prayer services and festive meals on these days. The Shalosh Regalim are still very important holidays, during which many Jews who live in the Diaspora (outside of Israel) will travel to the Holy Land to celebrate.

Twice a year, during Passover and again during Sukkot, there is a massive gathering at the Western Wall when all male descendants of Aaron the High Priest are invited to bless the Jewish people. This ceremony is called Birkat Kohanim (the Priestly Blessing).

Temple Mount Heritage Foundation founder and author Rabbi Yehudah Glick described the continuing importance of visiting the Western Wall and the Temple Mount, even in the temporary absence of the Third Temple.

Glick told Breaking Israel News, “The Temple Mount in itself is described in the Torah as ‘the venue He has chosen to rest His divine presence’. It is the only holy place in Judaism. Yes, we presently, for political reasons, cannot bring offerings, but we must get used to coming to the place ‘to see’ and ‘to be seen’.”

“Beyond that, the fact the Jews keep themselves away from the only place in the world we are obliged to, and instead give in the hands of those who incite and promote terror in the name of God, in itself is a disgrace of His Holy Name.”

Emphasizing the urgency of the task, Glick continued, “Building the Temple and serving God there has nothing to do with Mashiach (Messiah). It is our obligation as soon as we can.”