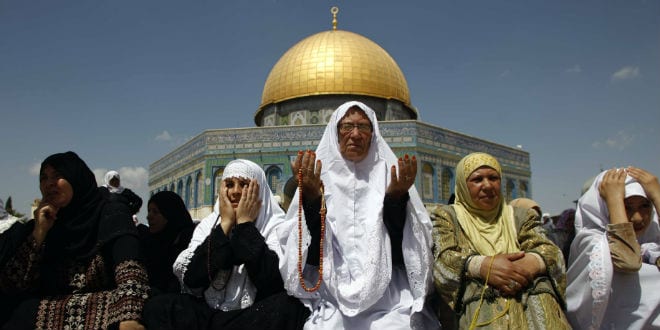 In a major victory for Temple Mount activists seeking to open the holy site to people of all faiths, Ya’alon declared the Murabitun and Murabitat groups “unlawful organizations,” now making membership in or financing of the group illegal.

The defense minister’s decision came in response to a public appeal last month by Public Security Minister Gilad Erdan and Temple Mount Heritage Foundation founder Rabbi Yehudah Glick. Ya’alon finalized the law upon the recommendation of the Israel Security Agency and Israeli Police as a necessary means to preserve public peace and security.

The Murabitun and Murabitat groups, comprised of Muslim men and women respectively, have become famous for their verbal and physical attacks on Jews visiting the Temple Mount. Founded by the extremist Islamic Movement, the group of harassers were bused in to the Mount and paid to attack Jewish visitors.

“The activity of Murabitun and Murabitat is a central cause of tension and violence on the Temple Mount specifically and in Jerusalem more generally,” Ya’alon said in a statement. “It is inflammatory and dangerous activity against tourists, visitors and worshipers at the site, leading to violence and potentially causing loss of life.”

Glick told Breaking Israel News, “It is really wonderful to see, after so many years that we have been begging, the government took this step. Thank God, after many meetings, the government finally understood the great need to take action against this major obstacle to peace and public order in Jerusalem.”
The Temple Mount activist praised the government’s efforts as a “first and very significant step in the right direction towards fulfilling the basic demand for respecting human rights for all, including Jews, on the Temple Mount, the world center for Godly peace.”

“We hope and are convinced that the government should continue in this direction for the sake of peace in Jerusalem,” he added.

While many are celebrating the long awaited decision by Ya’alon, not all are happy. Sheikh Ekrima Sabri, the former mufti of Jerusalem, condemned the decision as “illegal, illegitimate and inhumane.”

Speaking to the Times of Israel, Sabri said the outlaw of the Islamic groups “is an assault on al-Aqsa, because these women defend al-Aqsa. It shows that the Jews covet al-Aqsa mosque and wat to drive all Muslims out of it.”

Meanwhile, Hamas chief Khaled Mashaal has called on Muslims around the world to use “all means necessary to defend al-Aqsa.”