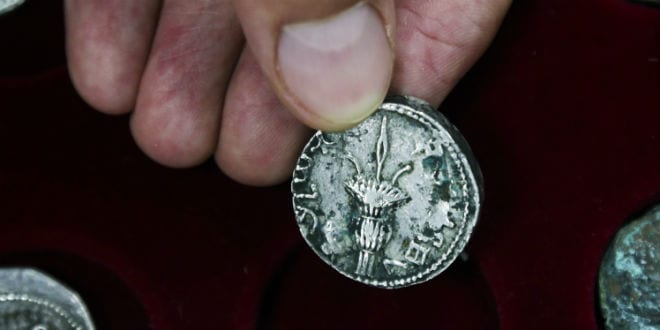 Biblical commandments not practiced for thousands of years are slowly returning to life. One such commandment, known as the Machatsit HaShekel, or half-shekel, is making a comeback thanks to a simple Jewish tailor in Jerusalem.

The half-shekel, one of the more obscure commandments found in the Bible, played an important role in Jewish history. Every year, each Jewish male over the age of 20 was obligated to give a compulsory donation of half of a shekel (Exodus 30:15). Regardless of status or wealth, the same amount was given by each man. Since it is forbidden by Torah law to actually count Jews, counting the coins took place of a national census. The half-shekels that were collected were used as a form of tax to support the Jewish Temple.

The nation of Israel continued to observe the commandment even after the First Jewish Temple was destroyed until it was outlawed by Roman Emperor Hadrian in the year 135 CE. Even Jews who lived outside of Israel continued to donate the half-shekel, despite the Roman Senate forbidding the export of gold and silver.

Reuven Prager, a tailor specializing in Biblically-styled clothing, is responsible for today’s revival of the lost commandment of the half-shekel. Prager’s passion for Biblical authenticity led him to investigate the commandment of the half-shekel. Being a practical-minded artisan, he began to mint his own half-shekel in March 1997 with a run of 1,000 coins. Today, Prager continues to mint a new half-shekel coin every year with a new design based on a Temple vessel or tool that has actually been reproduced.

Prager explained to Breaking Israel News that the demand for the coins has gone up dramatically as people re-awaken to this essential commandment. When asked about people’s reactions, he said that it had a lot to do with the coin itself.

“This is not a ‘wannabe’ or a wish list. This is something you can handle and put in your pocket,” he told Breaking Israel News. “The vessels pictured on the coins have already been made and can be photographed. And the coins are absolute hekdesh, holy and sanctified. This isn’t charity. They can only go to the Temple.”

The half-shekel was described by Rabbi Moshe Ben Maimon, a renowned Torah scholar from the Middle Ages more famously known as the Rambam, as being equal to 160 grains of barley, which, in modern measurements, would be approximately eight grams of silver.

The coin, which is Biblically obligated to be given in service to the Jewish Temple, can have no affiliation between those selling the coin and those collecting them. In the case of Prager’s coins, the collection is handled by a special organization established for this purpose, the Otzar Hamikdash (Treasury of the Holy Temple).

Otzar Hamikdash has arranged for the over 200,000 silver coins that have been collected to be stored by Brinks Security, which insures them for 125 percent of their value, taking into account the fifth that must be added to replace anything sanctified. Prager wouldn’t go into details about the worth of the coins, but simply stated, “You have no idea.”

Currently, American law forbids the shipment of these coins to Israel. To bypass the American prohibition, the transfer of the half-shekel is arranged via a personal emissary or by individuals who Prager has contacted to operate collection points in the US.

Prager has been working almost entirely alone on this project, with many rabbinic organizations reluctant to get involved in what is new territory for them. “It takes one kind of courage to decide to actually collect the coins,” Prager explained to Breaking Israel News. “It’s another kind of courage to take the initiative to start using the coins that have been sanctified for their intended purpose. And I haven’t found rabbis who have that kind of courage.”

Once the coins are collected, they obtain the status of hekdesh (sanctified for holy use) and may no longer be used for any profane use. From the large pile of silver coins, nine baskets are set aside for trumat halishkah (donations for the Temple service). In Temple times, this tax funded the Temple service. It is also required in order for public offerings to be considered communal.

A tailor by profession, Prager brought down the priestly garments as an example of the real costs involved to produce the clothing according to Biblical specifications. “Real bigdei kahuna (clothing of the priests) cost about $5,000 a set to produce. And you need thousands of them,” he told Breaking Israel News. In addition, “hundreds of harps, hundreds of flutes” are also needed for the priests and Levites to carry out their Temple service.

The remainder of the money, called shearei halishkah (remainder of the office), is used to prepare Jerusalem for the three yearly festivals during which all of Israel is commanded to make a pilgrimage. Though the collection takes place over a period ending just before the holiday of Purim, the distribution and allocation of the coins is done three times a year, just before each of the festivals.

In the upcoming week, Otzar Hamikdash will separate out the coins that would have been used during the holiday of Sukkot if the Temple had been standing today.

Despite once being quite numerous, archaeologists have found very few of these coins. In 2008, the Israel Antiquities Authority found a silver half-shekel while digging around the City of David. Archaeologist Eli Shukron suggested how the coin arrived at that spot.

“Just like today,” he said, “when coins sometimes fall from our pockets and roll into drainage openings at the side of the street, that’s how it was some two thousand years ago – a man was on his way to the Temple and the shekel which he intended to use for paying the half-shekel head-tax found its way into the drainage channel.”