Popular YouTube Minister: “No True Christian Would Turn on Israel” 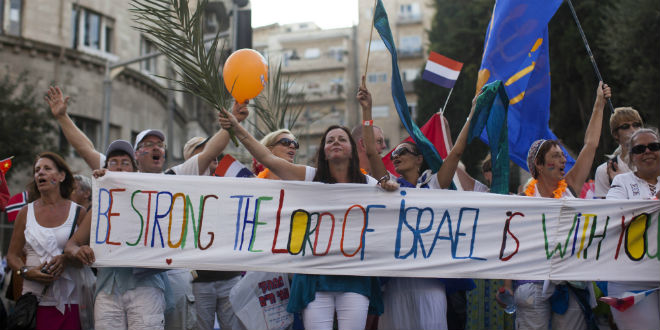 Amid a worsening international situation in attacks towards Israel, one popular YouTube minister is calling on Christians to fulfill their obligation in standing with the Jewish state.

Daniel Erickson-Hull, better known as Pastor D, is the force behind End Times News Ministry, which he calls “a YouTube ministry.” In an exclusive interview with Breaking Israel News, Erickson-Hull emphasized the absolute obligation of Christians to stand with Israel.

The End Times News YouTube channel  was founded in October, 2014. In less than a year, Erickson-Hull has over 7,300 subscribers and is adding new subscribers every day. So far, he’s posted 50 YouTube videos, all intended “to try to show people enough signs to provoke within them an awareness that we’re in the End of Days and to be prepared.”

Raised in an evangelical Christian family, Erickson-Hull recalls he “was brought up around a lot of talk about the End Times.” The establishment of the State of Israel in 1948 and the reunification of Jerusalem under Jewish dominion in 1967 were considered the fulfillment of Biblical prophecy. There were many signs that the time was ripe for redemption, but since it didn’t happen at that time, most people lost interest and gave up on the idea.

“End Times has always been an interest of mine, but last year, I was studying the Bible and just reading through it and trying to relate Biblical prophecy to what’s going on. I don’t want to be a false prophet and I might be wrong on this. We believe the Third Temple is going to be rebuilt. We believe, sadly, that there will be war again in Israel and most probably a Palestinian State will be created,” Erickson-Hull told Breaking Israel News.

Erickson-Hull visited Israel twice as a teenager as part of Christian musical tours. The first time was immediately after the Gulf War in 1991. His strongest memory was a sense of tension in the street. He fondly recalls that his Jewish tour guide, Shlomo ben Asher, was very sympathetic to the group of 100 Christian teens. Although their bus had rocks thrown at it by young Palestinians, he watched the Palestinian Arab bus driver and the Jewish tour guide play cards together. “It was a wonderful symbol of peace,” Erickson-Hull recalled.

He returned four years later and stayed in the Sea of Galilee area. “It was beautiful. I love Jerusalem and would love to come back. Please God, I will go back. I would love to go back and look around, now that I’m more interested in End of Times. In the 1990s, all of this was not known to me.”

Addressing himself to liberal Christian denominations in America that have removed the word Israel from the Bible, boycott Israel and cast Jesus as a Palestinian, Erickson-Hull asserts, “No true Christian would turn on Israel. The people who take Psalm 122 seriously, believe it was the word of God from the mouth of David. Those who are followers of God must pray for Israel.

“I see that the way it’s going is that all denominations will turn against Israel and only lone evangelical Christian and independent churches will stand with Israel. We will be standing with Israel in prayer,” he explained.

Discussing his End Times News Ministry, Erickson-Hull told Breaking Israel News of the urgency of helping people prepare. “We don’t know the order of events and when the very final events start happening, these things are going to kick off very, very quickly,” he said. “If persecution comes, there won’t be time to get right with God. I tell people to get ready, be ready, watch for the signs, live upright and be prepared for whatever may come.”

“I’m open to the possibility that I’m wrong. So many thing correlate at the same time and I also have a gut feeling. There are so many Biblical prophecies that have been fulfilled, so if nothing happens in this season, in my lifetime, I really do believe it will happen eventually,” Erickson-Hull continued. “If I’m proven wrong then I will accept the fact that my interpretation of Scripture was wrong, but the Scripture was correct.”

Erickson-Hull concluded with a strong message of support for Israel. “We have an absolute obligation to stand with Israel as Christians and to pray for the Nation of Israel and the Jewish people. I want to encourage Christians to not let go of that. If the denomination they belong to turns on Israel, I recommend that they boycott that denomination.