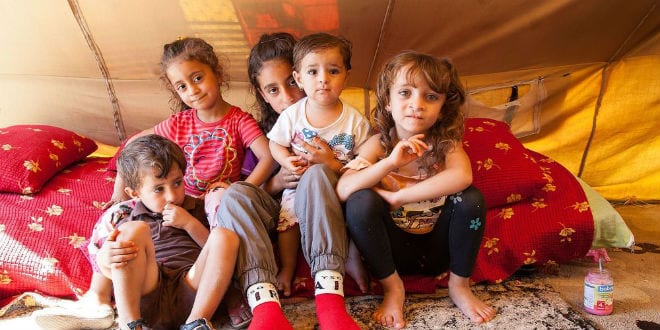 Over 6,000 Syrian refugees have flooded into Austria and Germany over the weekend as the two countries opened their borders to what is the first of many waves of escapees fleeing the civil war in the battered Middle East region.

The refugees arrived in Munich on special trains, with many more expected in what is quickly becoming the worst refugee crisis in recent history. Austria and Germany have announced they will allow thousands of refugees into their countries but other countries are not so welcoming.

An estimated 200,000 desperate Syrians, fleeing their war-torn country, have flooded Europe, risking their lives to find asylum. Last week, a boat carrying Syrian refugees overturned in an attempt to sail from Turkey to Greece, killing 12, including a mother and her two small sons.

In Hungary, 160,000 Syrians have passed through the country from Serbia on their way to Germany. Recent confrontations with Hungarian police led to a three day standoff at the Keleti train station as well as suspended train service to the border.

Syrians refused to cooperate with Hungarian authorities, fearing they would be put into refugee camps, as well as any aid from Hungarian authorities. The Syrians are afraid of being kept in Hungary and prevented from continuing their journey towards Germany, which they perceive as a wealthy nation.

Government spokesman Zoltan Kovacs explained that his country was trying to enforce European Union rules on the movement of undocumented migrants, and that it could not just allow the refugees to travel to Germany without registering them.

“It is not the choice of an illegal migrant to decide where he or she would like to go; there are procedures and protocols all EU nations have to follow,” he said. Hungary has set up barbed wire fences along its southern border with Serbia as part of efforts to stem the flow of refugees.

The EU committed in June to accepting 32,000 refugees. Hungarian Prime Minister Viktor Orbán told a radio station in Hungary on Friday, “What will it solve if we divide 50,000 or 100,000 migrants among us, when uncountable millions will be on the way? We may one morning wake up and realize that we are in the minority on our own continent.”

German government spokesman Georg Streiter told The Associated Press that the recent efforts are, “an attempt to help solve an emergency situation. But we continue to expect Hungary to meet its European obligations.”

German Chancellor Angela Merkel has been a strong advocate for helping Syrian refugees, calling on other EU members to shelter the refugees. She was quoted in the Funke newspaper on Saturday saying that her country had “no limits on the number of asylum seekers. As a strong, economically healthy country we have the strength to do what is necessary.”

German Foreign Minister Frank-Walter Steinmeier was slightly less altruistic, saying the measures were temporary. “The help in the emergency situation was linked to an urgent appeal not to make out of this the practice for the coming days,” he said.

Turkey, which shares a border with Syria and is participating in the US led coalition against the Islamic State (ISIS), has taken in approximately 2 million Syrian refugees from its war torn neighbor.  The United States has accepted 1,800 Syrian refugees and has agreed to accept up to 8,000 by 2016. Many of the refugees are Christians fleeing ISIS.