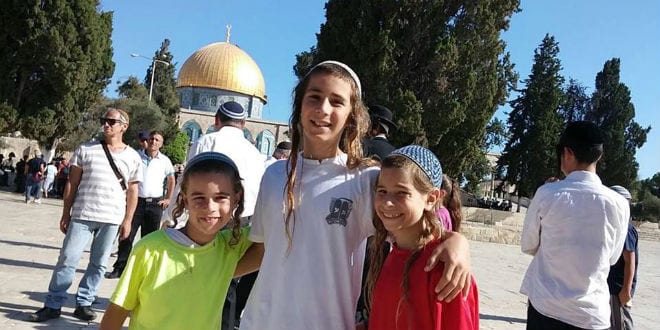 Recently, the Israeli police have begun to ban the Hamas-sponsored Morabtion and Morabitat instigators from the Temple Mount during the morning hours. The move allows Jewish and Christian visitors to ascend the Mount and visit the holy site unaccosted.

According to a report published by Cry for Zion, a movement that advocates for Jewish sovereignty over the Temple Mount, “The barred women now congregate outside the gate through which Jewish worshipers exit the Temple Mount and mount their verbal and physical attacks when Jews pass by.”

Cry For Zion supports the Jewish people’s rights to sovereignty over Mount Zion (the location of the Temple Mount) and freedom of worship by all peoples on the site. The organization has publicly welcomed the new initiative by the Israeli police, noting that it is effectively restoring order and security for pilgrims and worshippers during the morning visitation hours.

However, it has expressed dissatisfaction that the Israeli police have not instituted a complete ban against agitators on the Temple Mount. According to Cry for Zion, such a ban would enable people of all faiths to enter and worship the site in dignity and freedom.

Cry for Zion’s aims include greater access for Jewish worshipers and tighter restrictions on the Muslim Waqf, which currently has control over the site. Their core demands from the Israeli government and security bodies include opening the Temple Mount to Jewish worshipers 24 hours a day, seven days a week; allowing Jews to pray on the Temple Mount; allowing freedom of movement for Jews on the Temple Mount; keeping the Waqf at a distance from Jewish worshipers; curtailing illegal Waqf construction activities, including destruction, unauthorized excavations and renovations; and preventing activities unbecoming of a holy site, such as kicking a soccer ball.

They are one of a growing number of Temple Mount advocacy organizations currently working to increase access on the Mount. The movement, which is rapidly gaining momentum as more and more people, Jews and non-Jews alike, become aware of the current state of the Temple Mount, includes groups such as Students for the Temple Mount, Women for the Mikdash (Temple), and the Temple Mount Heritage Foundation, which is run by the movement’s unofficial spokesman, Yehudah Glick.

The many different groups, driven by faith and united in their passion for freedom of access and worship on the Temple Mount, work closely together to bring greater awareness of the site’s importance to the world.

John Enarson, Christian Relations and Creative Director at Cry for Zion, told Breaking Israel News, “It is our greatest desire at Cry For Zion to raise awareness, unity, and support for the efforts of [people such as] Rabbi Yehuda Glick, and others of like mind.”

The movement, which is comprised of Christian and Jewish supporters, actively appeals to the ruling bodies of Israel, asking them to exercise their legal authority in guaranteeing Jewish rights on the Temple Mount. So far, the cries have fallen on deaf ears, but with the recent shift in police policy, some members of Cry For Zion are convinced that change is indeed possible, and that one day, Jews will once again be allowed to pray on the Temple Mount.