New Jerusalem Street to Commemorate Savior of 40,000 Jews During Holocaust 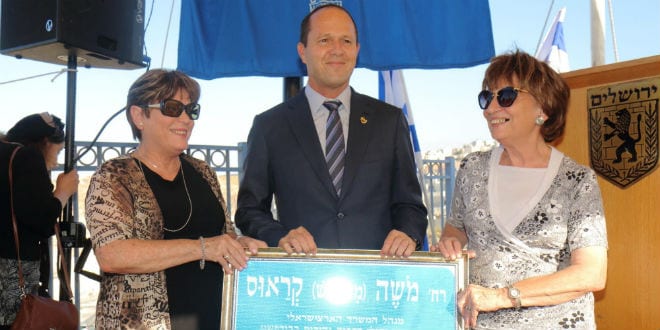 Jerusalem Mayor Nir Barkat inaugurated a new street in the Israeli capital in an official ceremony on Tuesday, August 24. Named after Moshe (Miklós) Krausz, the little known Hungarian Jew who saved about 40,000 Jews during the Holocaust,  the street naming publicly recognizes and honors Krausz’s work in a rare instance of recognition.

“This commemoration only begins to correct a historic injustice,” said Nachi Eyal, CEO of The Legal Forum for Israel and one of the people behind this initiative.

“Krausz was a man of the World Zionist movement and the Mizrachi movement who saved tens of thousands of Jews and yet his name has been left out of the public knowledge. Krausz died alone and almost forgotten in Jerusalem after having immigrated here with the end of World War II,” Eyal told Tazpit News Agency.

Krausz, who served as the director of the Palestine Office for the World Zionist Movement in Budapest, was responsible for obtaining emigration permits for Jews to the British Mandate.

Following the Nazi invasion of Hungary in 1944, Krausz, aided by his connections with Swiss Vice-Consul, Carl Lutz, began producing diplomatic patronage certificates for thousands of Hungarian Jews and their entire families, effectively granting them diplomatic immunity from the Nazis.

Additionally, through his Swiss connection, Krausz obtained extraterritorial status under the auspices of the Swiss government to many private buildings where Jews would hide from Nazi extermination.

Most prominent among these “safe houses” was a disused glass factory in Budapest. Dubbed “The Glass House” by survivors, over 3,000 Jews used the building as a hiding place and survived the Holocaust.

“Jews from all walks of life and different backgrounds huddled together in the crowded cellars,” Mordechai Newmann, a Glass House survivor who attended the ceremony told Tazpit. “Orthodox rabbis, socialist youth activists, Zionist Organisation workers, and their families all had their place in the Glass House.”

“At night, members of Zionist Youth organisations would dress up in Nazi uniform and sneak out of the cellars to find more Jews and smuggle them into the glass house,” recounts Newmann, who was 14 at the time.

Yet this elaborate scheme that saved such a staggering number of lives from the Nazi extermination machine had gone unnoticed and did not receive much public attention in Israel until now.

According to Dr. Ayala Nadivi, a historian of Hungarian Jewry, the reasons for Krausz’s hitherto anonymity might have been political.

“There was quite a lot of infighting and political ego struggles between the various Jewish and Zionist bodies of the time,” Dr. Nadivi told Tazpit. “Krausz was a member of the Mizrachi movement, while the Jewish leadership in British Mandate Palestine was predominantly of the Mapai movement (Worker’s Party of The Land of Israel). Independently of Krausz and Lutz’s rescue efforts, Mapai established the Budapest Rescue Committee and appointed Israel Kasztner to head it.”

“Later, with the end of the British Mandate and the founding of the State of Israel, the same Mapai became the governing party in Israel. When Kasztner was accused of collaboration with the Nazis during his rescue activities, Krausz gave unfavorable testimony against him on trial. From that point on and despite the evident existence of records of Krausz’s rescue efforts, not a single national organisation or newspaper acknowledges him,” Dr. Nadivi explained.

According to Nachi Eyal, it was Dr. Nadivi’s book “Between Krausz and Kasztner: The Battle to Save Hungarian Jewry”, published in 2014, that was the catalyst to the reemergence of Krausze’s name on public record.

“After being told about the book by my assistant and reading it, I felt compelled to petition Mayor Barkat,” Eyal told Tazpit. “After filing a request and all the necessary paperwork, including the historic records assembled by Dr. Nedivi, the Mayor acquiesced and named a Jerusalem street after this man who saved more Jews than Schindler and Kasztner combined and was a Jew himself.”

The inauguration ceremony was attended by Eyal and Dr. Nadivi, Glass House survivors and their descendants, as well as former Air Force commander General Eliezer Shkedi and Member of Knesset Orit Strook.

The efforts by Dr. Nadivi and the Legal Forum for Israel to restore and perpetuate Krausz’s remarkable story and legacy do not end with the street naming. “I have already sent a letter to the minister of education, Naftali Bennett, asking him to include the story of Krausz and the 40,000 Jews he saved, in the national school curriculum,” said Eyal.