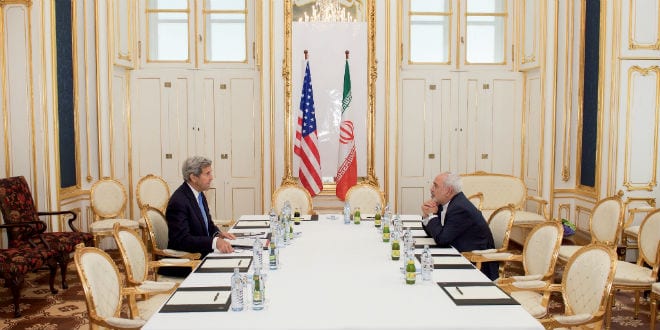 Over 1,000 American rabbis have signed a letter to Congress, urging US lawmakers not to accept the nuclear accord reached between the P5+1 powers and Iran earlier this summer. The petition, organized by the Zionist Organization of America, calls “upon our Senators and Representatives to consider the dangers that this agreement poses to the United States and our allies, and to vote in opposition to this deal.”

The deal reached in mid-July offers sanctions relief to Iran in exchange for limiting its nuclear activity over the next 10-15 years and allowing international inspectors to examine the Islamic Republic’s facilities. Critics, however, including most Israeli leaders and security experts, believe the deal will not prevent Iran, whose continued rhetoric calls for the destruction of both America and Israel, from developing a covert nuclear program or funding terror around the world.

“For more than 20 months, our communities have kept keen eyes on the nuclear negotiations overseas. As our diplomats from Washington worked tirelessly to reach a peaceful resolution to the Iranian nuclear challenge – we have hoped, and believed, that a good deal was possible,” the letter reads.

“Unfortunately, that hope is not yet realized.”

The letter goes on to outline the rabbis’ concerns. “The Iranian regime denies basic human rights to its citizens, publicly calls for America’s downfall and Israel’s annihilation, and openly denies the Holocaust. This dangerous regime – the leading state sponsor of terrorism – could now be given the financial freedom to sow even more violence throughout the world.

“But what do we get in return?

“Even after flooding Iran with an influx of funds, this deal will not subject Iran to an airtight, comprehensive inspections structure – granting the regime the means to violate the agreement and develop a covert nuclear program.

“The deal would also lift key arms embargos, so that in eight years Iran will be given international legitimacy to arm terror groups with conventional weapons and ballistic missiles.

“The agreement also entitles Iran to develop advanced centrifuges after 10 years – all but paving Iran’s path to a nuclear weapons capability with virtually zero ‘breakout time.’”

Citing Isaiah 2:4, the signatories express the hope that God will bring the world to an era in which “ ‘nation shall not lift up sword against nation, neither shall they engage in war anymore,’ when peace will prevail. Until then, we simply cannot afford to empower and enrich a regime that continues to lift its sword without mercy towards so many who stand for good, freedom and peace.”

Meanwhile, 340 other American rabbis, many of whom have ties to organizations known to be critical of Israel, sent their own letter to Congress, urging them to ratify the deal. The Jerusalem Post reported last week on that letter, which read, “we are deeply concerned with the impression that the leadership of the American Jewish community is united in opposition to the agreement.” The letter states, “We, along with many other Jewish leaders, fully support this historic nuclear accord.”